Now’s the Time to Restore Integrity to EPA Regulatory Science

Calvin Beisner
|
Posted: May 22, 2018 12:01 AM
Share   Tweet
The opinions expressed by columnists are their own and do not necessarily represent the views of Townhall.com. 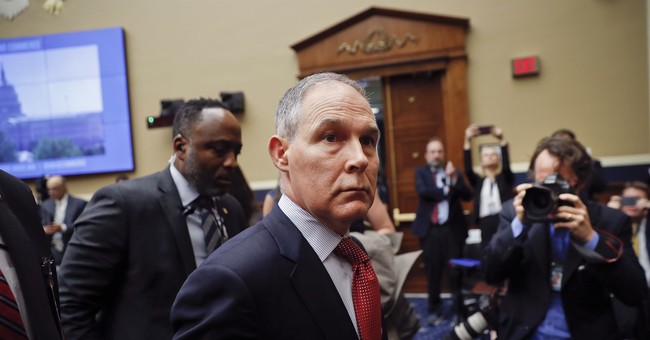 For decades the federal Environmental Protection Agency (EPA) has gotten away with creating regulations that lack sound scientific basis, costing Americans hundreds of billions of dollars without solid evidence that those costs were justified.

It’s done this in two ways.

Sometimes it’s simply thrown out scientific results and regulated to satisfy a political pressure group. That was largely the case when in 1972, contrary to its own scientific findings but under heavy pressure from environmentalists, it banned the use of DDT, the most effective, least expensive, safe pesticide by which to control or eradicate disease-carrying insects like mosquitos and lice.

The U.S. had already largely eliminated malaria by widespread spraying of DDT from the 1940s into the 1960s, so the ban didn’t have immediate, large-scale negative consequences here. But it has made it more difficult to combat the recent spread of other insect-borne diseases like West Nile Virus, Zika, Lyme, and spotted fever, and even malaria is making a comeback.

At other times the EPA has built new regulations on “secret science”—studies whose authors refuse to grant other scientists access to the data, computer code, and methodology behind them. Such studies are not subject to replication by other scientists. Yet replication is the acid test of scientific research.

“Secret science” has been especially common as the basis for pollution regulation dependent on dose/response relationships and for regulation related to anthropogenic global warming (AGW).

STRS provides that “When promulgating significant regulatory actions, the Agency shall ensure that dose response data and models underlying pivotal regulatory science are publicly available in a manner sufficient for independent validation.” It codifies what was intended in the Secret Science Reform Act of 2015, and the Honest and Open New EPA Science Treatment Act of 2017 (HONEST Act), both of which passed the House but never came up for vote in the Senate.

The Cornwall Alliance for the Stewardship of Creation—a network of scientists, economists, and religious leaders dedicated to environmental stewardship and economic development for the poor—has issued and is gathering signatures to an open letter supporting the STRS that calls the proposed rule “badly needed to assure American taxpayers that the EPA is truly acting in their best interests.”

The first is that peer review ensures the quality of studies published in refereed journals. But there is actually no empirical evidence that peer review works well. Drummond Rennie, deputy editor of the Journal of the American Medical Association and intellectual father of the international congresses of peer review held quadrennially starting in 1989, has said, “If peer review was a drug it would never be allowed on the market.” In fact, as John P.A. Ioannidis demonstrated in a celebrated article in PLOS/Medicine, “most scientific research findings are false.”

The second common objection is that the rule would prevent the EPA from using studies that involved confidential information, such as personal health data or corporate proprietary information. In an open letter to EPA Administrator Scott Pruitt, the Leftist, political-activist Union of Concerned Scientists (UCS) argued, “there are multiple valid reasons why requiring the release of all data does not improve scientific integrity and could actually compromise research, including intellectual property, proprietary, and privacy concerns.”

Yet Section 30.5 of the rule expressly states: “Where the Agency is making data or models publicly available, it shall do so in a fashion that is consistent with law, protects privacy, confidentiality, confidential business information, and is sensitive to national and homeland security.” Section 30.9 allows the Administrator to make exceptions when compliance isn’t feasible.

A third common objection, also expressed in the UCS letter, is that “many public health studies cannot be replicated, as doing so would require intentionally and unethically exposing people and the environment to harmful contaminants or recreating one-time events (such as the Deepwater Horizon oil spill).” But what need to be replicable in studies of such events are not the events themselves but the procedures used to collect and analyze data and make inferences from them.

Consider, for example, a study that used tree-rings as proxy temperature measurements and purported to find that neither the Medieval Warm Period nor the Little Ice Age had occurred but that a rapid and historically unprecedented warming had begun in the late 19th century. The study became iconic for claims of dangerous AGW driven by human emissions of carbon dioxide.

No one needed to use a time machine to return to the 11th through 20th centuries and regrow trees to recognize that the authors had committed confirmation fallacy by excluding certain data and misused a statistical procedure, resulting in false results. All anyone needed was access to the raw data and the computer code used to analyze it.

Yet the lead author’s long refusal to allow access to raw data and computer code delayed discovery of these errors for years, during which the Intergovernmental Panel on Climate Change, the public, and governments all over the world were led to believe its claims and formulate expensive policies based partly on them.

The UCS letter asserted that concerns about transparency and certainty raised by supporters of the rule “are phony issues that weaponize ‘transparency’ to facilitate political interference in science-based decision making, rather than genuinely address either.” But the irreproducibility crisis is real, not phony. Furthermore, enhanced transparency works against politicization, not for it. This objection is so patently invalid as to suggest that those who offer it are themselves weaponizing confidentiality to facilitate their own political interference in science-based decision making.

STRS will improve, not harm, the EPA’s mission to protect Americans from real environmental risks. It will also reduce the risks caused by unjustified but costly regulations. It should be adopted.