Why Trump Should Fire the Paris Climate Treaty

Calvin Beisner
|
Posted: Nov 24, 2016 12:01 AM
Share   Tweet
The opinions expressed by columnists are their own and do not necessarily represent the views of Townhall.com. 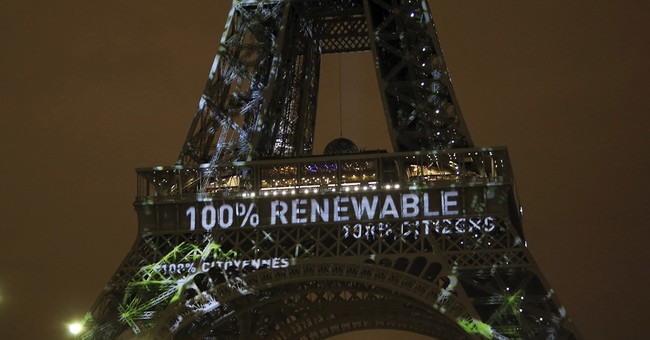 On November 16, U.S. delegates to COP-21 in Marrakech, Morocco—the twenty-first Conference of the Parties to the United Nations Framework Convention on Climate Change—unveiled the United States Mid-Century Strategy for Deep Decarbonization.

The document sets forth how the U.S. Obama Administration intends intended to achieve its “Intended Nationally Determined Contribution” to implementing the Paris climate treaty—which President Barack Obama signed as an executive agreement because he knew it couldn’t get the constitutionally required Senate ratification.

Since implementation depends on the commitment of the executive branch of the federal government, and President-elect Donald Trump denies that manmade global warming is a major threat and has announced his intention to ignore the Paris treaty, it’s essentially dead on arrival.

What Trump should do with the Paris treaty, by the way, is not simply to ignore it, and not to “withdraw” from it, but to announce that he agrees with all the nations around the world that, contrary to Obama, it is a treaty and therefore the U.S. never has been and will not be a party to it without Senate ratification. He should then submit it to the Senate, where it will be soundly defeated.

But the fact that the Mid-Century Strategy (MCS) will wind up in the dustbin of history doesn’t make it irrelevant. Although it’s likely to have had little to no policy effect by mid-century, it will even then be a good reminder of how easily governments can get carried away with grandiose and expensive dreams untethered to reality.

The 111-page document reveals the outgoing Administration’s plan dream to cut net U.S. carbon-dioxide and other greenhouse gas emissions to 80 percent below 2005 levels by 2050 by:

Why all the [sic]s? To highlight the tacit deception when climate alarmists use carbon as shorthand for carbon dioxide.

The deception is important to the messaging. When readers think of carbon they think of black soot, which is not only dirty but also dangerous to respiratory health. But when they think of carbon dioxide, they think—if they remember their grade-school chemistry and biology—of an odorless, colorless, tasteless gas, non-toxic at concentrations 20 times the current atmospheric concentration even with months-long exposure, and essential to all life, increases in which improve plant growth and hence agricultural yields and food affordability for everyone, especially the poor.

Why cut all those emissions? To limit post-Industrial Revolution global warming to no more than 2°, preferably 1.5° C—magic figures dreamed up in the 1970s without empirical support but embraced ever since by climate alarmists intent on using that goal to justify massive changes in the world’s energy systems achievable only through massive expansions in (especially global) government control over massive portions of our lives.

The Obama team plans dreams that the lion’s share of reductions in net U.S. greenhouse gas emissions will come from replacing fossil fuels with nuclear and renewables—chiefly wind and solar.

What will achieving that cost? While “cost” appears 211 times in the document, one searches in vain for an estimate of the total cost of the decarbonized U.S. energy system compared with continuing with the current mix of energy sources and technologies.

Fortunately, economists at the Heritage Foundation have provided a substitute. Fulfillment of Obama’s Paris commitment dream would shave $2.5 trillion from U.S. gross domestic product just by 2035 while raising the average family’s electricity expenditures by 13 percent per year. Costs are likely to rise higher over the remaining 15 years to 2050, and higher still through 2100, as cheaper changes give way to more expensive ones.

To be very generous, let’s assume we achieve all that the MCS dreams. How much global warming would that prevent? Again, one searches in vain for an estimate.

But Danish economist Bjørn Lomborg, head of the Copenhagen Consensus, has run the numbers using the U.N. Intergovernmental Panel on Climate Change’s own data and models. “US climate policies” under the Paris treaty, he writes, “in the most optimistic circumstances, fully achieved and adhered to throughout the century, will reduce global [average] temperatures [GAT] by 0.031°C (0.057°F) by 2100.” Let’s generously assume we’d achieve half that—0.017°C (0.028°F) by 2050 under the MCS.

Trump should stand by his campaign promise that under his administration the U.S. would not implement the Paris treaty.