Cal Thomas
|
Posted: Jan 28, 2021 12:01 AM
Share   Tweet
The opinions expressed by columnists are their own and do not necessarily represent the views of Townhall.com. 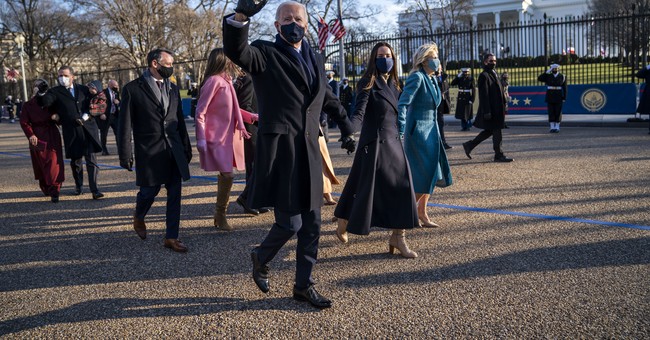 President Biden and his press secretary, Jen Psaki, have assured us he is a "devout Catholic" who "attends church regularly." The question is not new but should be asked again and a credible answer demanded. How can one be devout about one's faith and not comport with Scripture and the teachings of the Catholic Church? As the Apostle James wrote, "faith without works is dead." (James 2:14-26)

President Biden might believe his "works" consist of more government programs, executive orders and policies that some believe are contributing to the divisive culture wars, but some of these policies are antithetical to his church's doctrines. Many Catholic leaders have criticized him for his stand on abortion, same-sex marriage, and transgender equality. Biden has added to his pro-choice stand a reversal on federal funding of abortion, which he long opposed until the 2020 presidential campaign.

Archbishop Jose Gomez, president of the U.S. Conference of Catholic Bishops, has said: "When politicians who profess the Catholic faith support [abortion rights], there are additional problems. Among other things, it creates confusion among the faithful about what the Catholic Church actually teaches on these questions."

Since Biden is such a "devout Catholic" maybe he should consider what Jesus said about false teachers: "Beware of false prophets, which come to you in sheep's clothing, but inwardly they are ravening wolves." (Matthew 7:15)

Joe Biden was the safest choice for the left in advancing a liberal agenda. He put on the sheep's clothing of a "moderate," but underneath is a man whose policies have been revealed to comport with the Bernie Sanders wing of his party. Say one thing and do another is a major reason so many have become cynical about politics and politicians. They increasingly want to spend more of our money on things that improve few lives, while imposing policies, like stopping the Keystone XL Pipeline, which cost jobs.

That Keystone executive order earned condemnation from several labor unions that had endorsed Biden for president.

If spending and other liberal policies improved lives would they not have done so by now, considering our massive debt? And yet they tell us the problems remain. All they need is ever-higher taxes and more spending and all will be well.

On the question of private faith and public responsibilities, the U.S. Conference of Catholic Bishops has again made church teaching clear: "Many Catholics do not adequately understand that the social teaching of the Church is an essential part of Catholic faith."

Biden has reverted to an old and meaningless excuse when he says he doesn't want to "impose" his faith on others. The question then becomes why have a faith at all, if he won't apply what his church teaches as truth? How is Biden different from a person who is about to witness a murder but doesn't try to stop it, or call the police, because he doesn't want to impose his moral views about the value of life on a man about to commit an illegal and immoral act?

If Biden doesn't want to "impose" his view about unborn life, why can't he at least argue in favor of it in an attempt to persuade people of life's value at the start and at all stages until natural death? That is the position of his church. If it is his position, he should say so and publicly defend it, otherwise it becomes devoid of any moral value.