What's Wrong in Washington (and America)

Cal Thomas
|
Posted: Apr 03, 2018 12:01 AM
Share   Tweet
The opinions expressed by columnists are their own and do not necessarily represent the views of Townhall.com. 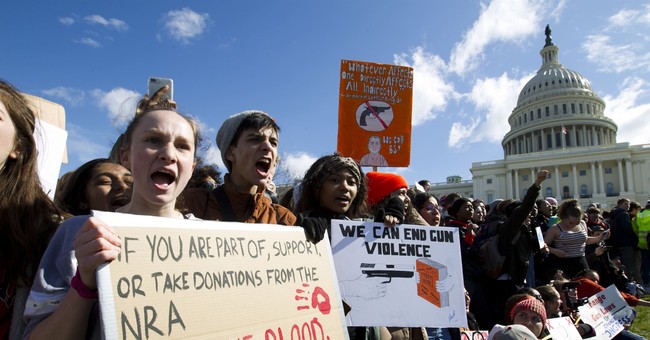 KEY LARGO, Florida -- At dinner with friends, I was asked what is wrong with Washington. The question presumes a standard by which "wrong" can be defined.

I am frequently asked this question by people who do not live in "the swamp." They don't behave like Washington politicians. If a disagreement arises in their personal or professional life, they discuss it and usually compromise and work things out. Only in Washington, they note, does this rarely happen, and when it does it makes headlines.

The most obvious answer to the question I am asked -- often before the appetizer arrives -- is that it is about power, about raising money to achieve it, and then holding onto it once you've gotten it. A corollary is that if an issue is actually resolved, it disappears as a fundraising and electoral tool. That is why certain issues resurface during (and between) election cycles. Issues like the poor (but likely only when Republicans are in power, not when Democrats hold the majority), education (stated goals are never achieved, and no matter how much is spent it is never enough, which is why the left opposes school choice), the environment ("climate change" appears to remain an unchallengeable doctrine for the left, though there is some evidence ignored by liberal media that strongly suggests otherwise), taxes and spending (history shows the benefits of small government and low taxes, but in an age of envy, greed and entitlement one finds it increasingly difficult to teach self-reliance when the federal government is seen by too many as a giant ATM).

Term limits for those who stay too long at the government "fair" would contribute mightily to draining the swamp, but that is unlikely to happen because Congress would have to vote for them. That's not likely to happen. Politicians are not about to vote themselves out of office, so we the people must give them a push.

Another contributing factor to Washington's dysfunction is the expectation that government can -- or should -- solve every problem. That it consistently demonstrates it cannot does little to dissuade some from believing it can. This is cult-like thinking in which evidence never squashes faith.

If Washington dysfunction is to end, I say to my dinner companions, the expectations of the American people must change.

Where can people look for inspiration? Certainly not the news media, which consistently promotes government as the only solution to any problem, no matter how often government fails. What about the entertainment industry? Hardly. Most films and TV are about promoting social and political agendas held by "progressives."

Academia? When I was in college, the purpose of a good education was to enable students to establish careers that would allow them to take care of themselves and their families. At too many universities today it seems one is "taught" left-wing propaganda and subjects that have nothing to do with preparing someone to have a career that relates to anything most people wish to buy or in which they might have an interest.

Where have you gone Horatio Alger and all of the inspiring stories named after you? Where are the models for success that once inspired others to follow these examples?

The solution to government dysfunction can be found in the Constitution, history and common sense. All are being ignored and so government, its cost and its multiple failures expand, leading to an eventual and inevitable breaking point.