Can Trump-Haters Be Thankful for Him?

Cal Thomas
|
Posted: Nov 23, 2017 12:01 AM
Share   Tweet
The opinions expressed by columnists are their own and do not necessarily represent the views of Townhall.com. 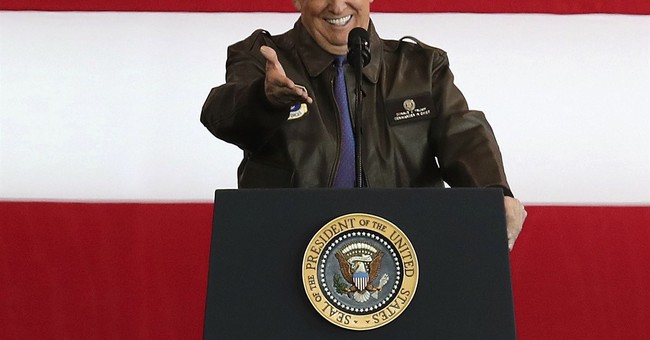 Any other Republican president but Donald Trump might expect to get at least some credit for the mostly positive direction in which the country is headed. Unfortunately, the Trump-haters prefer to focus on his, shall I say, unusual personality, rather than results. So let's put personality aside and consider what has happened in his first ten months in office.

The liberal Los Angeles Times reported on a focus group conducted by Democratic pollster Peter Hart. Of those polled, Trump supporters and those who voted for Hillary Clinton expressed disappointment about the president's behavior but gave him positive marks on the economy. If "it's the economy stupid," as Bill Clinton strategist James Carville once said, and the economy is roaring, what's the problem?

As the president has repeatedly said, the stock market continues to soar to new heights, which must delight retirees in Florida who see their IRA and 401K dividends rising most months. Unemployment figures are the lowest they've been in 17 years. Even unemployment among Blacks is down, as are the numbers of people on food assistance.

ISIS has been ousted from its last stronghold in Syria. True, President Obama deserves the credit for beginning the process with heavy bombing of ISIS targets, but it is President Trump who lifted many of the rules of engagement that kept the U.S. military fighting a losing battle.

North Korea is back on the list of state sponsors of terrorism where it belongs.

The president has pushed tax reform, which hasn't been successfully addressed since 1986, to a point where it is on the verge of Senate approval, assuming a few recalcitrant Republicans can be persuaded to put taxpayers first, instead of the grievances they hold against the president (I'm speaking of John McCain, Bob Corker and Jeff Flake).

Goldman Sachs strategists are predicting not only a continued American economic recovery but a concurrent worldwide lifting of many boats. One reason is the cash that has been sitting on the sidelines during the last recession is now making a beeline for stocks and mutual funds, causing the Standard and Poor's Index to rise by a spectacular 20 percent so far this year. That's more than triple its average annual increase over the last 20 years. Despite higher stock prices, Goldman Sachs analysts are recommending their clients buy now. Tech stocks are performing particularly well as companies re-invest profits to expand their firms.

When the left gives grudging credit to a president it hates, you know he must be doing something right. Here's what Atlantic magazine said in its August 2 issue: "With the Trump administration's chaos sucking up all the attention, it's been able to move forward on a range of its priorities, which tend to be more focused on regulatory matters anyway. It is remaking the justice system, rewriting environmental rules, overhauling public-lands administration, and green lighting major infrastructure projects. It is appointing figures who will guarantee the triumph of its ideological vision for decades to come."

That may be faint praise, but it's praise.

President Trump is appointing conservative judges to federal courts and has released a list of names to choose from should another vacancy occur on the Supreme Court. All appear to be conservative constitutionalists.

Yes, his form could be better, but the substance is very good. Imagine what he could do if congressional Republicans got behind him -- as Democrats do with a president of their party -- and started backing him on legislation they promised to enact during their campaigns.

So, even if you are not particularly enamored by the president's style (and many continue to be), give him some credit, especially if you are traveling this Thanksgiving, which is a sure sign that the economy and consumer optimism heading into the busy shopping season is on the increase.

For that, all of us -- even Democrats -- should be thankful.