Cal Thomas
|
Posted: Sep 26, 2017 12:01 AM
Share   Tweet
The opinions expressed by columnists are their own and do not necessarily represent the views of Townhall.com. 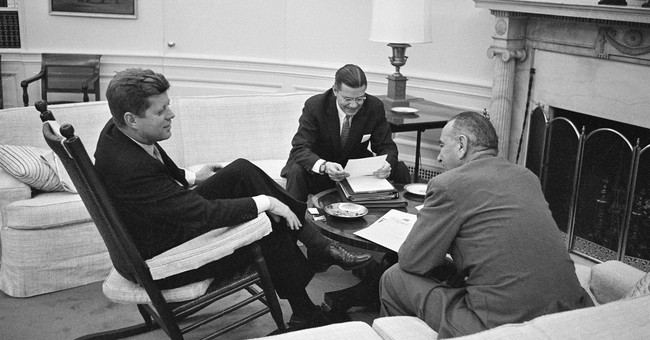 "The highest patriotism is not a blind acceptance of official policy, but a love of one's country deep enough to call her to a higher plain." -- Sen. George McGovern (D-SD)

Filmmakers Ken Burns and Lynn Novick have performed a vital public service in making their documentary "The Vietnam War" for PBS. Given the division that war caused in America, it is a pretty fair chronicling of the way things were half a century ago. The film brought back a lot of mostly bad memories to people of my generation.

Chief among them was the unfairness of those drafted to fight. The film notes a disproportionate number of African Americans were taken from inner cities. I saw that in my company at Fort Gordon, Georgia, where the few white men, besides me, were poor West Virginians.

I had recently flunked out of my freshman year at American University and was listed as 1A, prime draft material. Those who remained in college or those who suddenly discovered an interest in The Almighty and enrolled in divinity school remained deferred. A woman I knew at the draft board called to say my number was about to come up and urged me to make arrangements.

I was working as a copyboy at NBC News in Washington at the time, and I asked the Pentagon correspondent if he knew someone I could speak to about a good assignment. He did, and I wound up "fighting communists" with Armed Forces Radio in New York. Few others had such connections, which was also unfair to them. I was from a conservative family that was supposed to hate communists, but the Vietnam War, even in the mid-'60s, increasingly appeared to me more like Custer's last stand, not World War II.

The film notes the failure of generals and politicians at all levels. John F. Kennedy was concerned that pulling advisers from Vietnam might hurt his re-election chances in 1964. After his assassination, Lyndon Johnson had the same concern and listened to generals trained in World War II tactics, which were wrong for Vietnam.

When Secretary of Defense Robert McNamara wrote a private memo to LBJ in 1967, expressing his belief that the war could not be won, Johnson shuffled him off to the World Bank. It would be two decades before McNamara spoke publicly about his doubts and confessed his misjudgments, too late for the nearly 60,000 noble and faithful patriots who were killed fighting what they were told was a war to stop the spread of communism.

Sen. Eugene McCarthy (D-MN), who challenged Johnson for the 1968 Democratic presidential nomination and eventually forced him from the race, gave a speech in Chicago on December 2, 1967, that sounded like surrender to "America: love it or leave it" supporters of the war, but in hindsight it rings true.

"A war which is not defensible even in military terms, which runs contrary to the advice of our greatest generals -- Eisenhower, Ridgway, Bradley, and MacArthur -- all of whom admonished us against becoming involved in a land war in Asia. Events have proved them right, as estimate after estimate as to the time of success and the military commitment necessary to success has had to be revised -- always upward: more troops, more extensive bombing, a widening and intensification of the war. Extension and intensification have been the rule, and projection after projection of success have been proved wrong."

Again, the bravery of our military was never in doubt, but misjudgments by egomaniacal politicians are the real lessons of Vietnam. Current and future generations should watch this documentary and learn from the lessons of Vietnam, which, as evidenced by more recent wars, we apparently have not yet fully internalized.

Share this on Facebook
Tweet
'Justice was Served': Loudoun County Student Found Guilty of Bathroom Sexual Assault
Landon Mion
Dave Chappelle to Transgender Community: 'I Am Not Bending to Anybody’s Demands'
Landon Mion
Biden Jokes to Elementary Schoolers That His Job is to 'Avoid' Answering Questions from Reporters
Landon Mion
Father of Loudoun County Sexual Assault Victim Demands NSBA Apologize for Labeling Him a Domestic Terrorist
Landon Mion
Another Large Migrant Caravan Is Heading Towards the US: 'Tell Biden We Are Coming'
Julio Rosas
Two D.C. Police Officers Were Reportedly Told to Have Abortions to Keep Their Job
Madeline Leesman