It's Time For Trump

Cal Thomas
|
Posted: Sep 27, 2016 12:01 AM
Share   Tweet
The opinions expressed by columnists are their own and do not necessarily represent the views of Townhall.com. 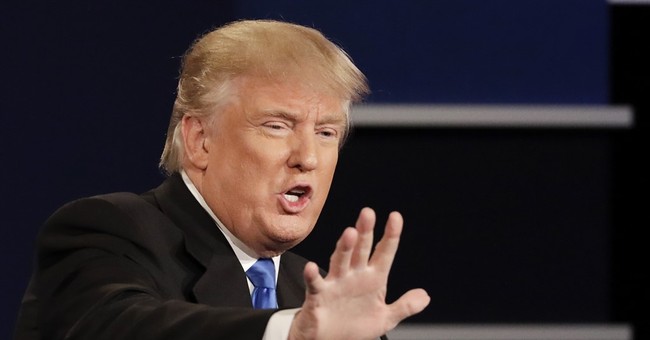 Now that all of my inside-the-beltway, elitist, morally superior friends and colleagues have weighed in with their self-righteous denunciations of Donald Trump, it's my turn.

After initially opposing his candidacy for president, I have come around to another point of view.

The election of Hillary Clinton will perpetuate and probably worsen everything many people hate about our bloated and dysfunctional government, collectively and derisively known as "Washington." The election of Donald Trump will offer an opportunity -- perhaps the last for decades -- to "fire" or at least isolate the elites, returning the country to its constitutional boundaries.

All analogies break down at some point, but let's engage in a theological stretch. When Jesus overturned the money changer's tables in the Temple, he said that instead of a house of prayer, the elites of his day had turned the Temple into "a den of thieves."

That increasingly applies to Washington. If Hillary Clinton wins in November, government will grow bigger and more expensive with all of her "investment" ideas, many of which have been tried before and failed. Remember the "stimulus," which was targeted at infrastructure? Remember "shovel-ready jobs," which were neither?

Under President Hillary Clinton, what's to stop secular progressives from exacting revenge on churches and pastors who preach a different gospel than the one they favor? It has already started in Massachusetts with the transgender public accommodations bill, taking effect Oct. 1. The law allows transgender individuals to use public bathrooms that match their gender identities. It also protects them, writes the Boston Globe, "from discrimination in public spaces such as museums, restaurants, malls, and libraries." And even churches, which may hold different views on the transgender issue, because they routinely hold events such as Bingo night, spaghetti dinners, book drives and charity car washes, all of which are open to the general public. The church hall may now be considered public space.

Seventeen U.S. states have similar laws. If Hillary gets to appoint justices to the Supreme Court, will we be forced to accept more like this?

Donald Trump is addressing the legitimate concerns of a large number of Americans who increasingly feel ignored by their government. These concerns include anemic economic growth. A growing economy produces private-sector jobs that create capital and wealth. These forgotten Americans are against open borders, which the president seemed to champion in his final speech to the United Nations General Assembly. Billionaire George Soros has pledged "to invest up to $500 million in programs and companies benefiting migrants and refugees fleeing life-threatening situations."

Many are tired of fighting wars we don't win and fighting terrorism with no clear strategy, all the while admitting more "refugees" from countries where terrorism is a way of death. They are weary of the denigration of law enforcement. Hardworking people are tired of being told they are not paying enough in taxes to a government that only wastes it.

The ignored are tired of being branded racists. Christians are tired of being called homophobes and Islamophobes and told their beliefs are inferior to those who want to destroy the country and undermine values that were once widely held. If the secular progressive agenda is considered progress, as they claim, what would regress look like?

Choosing a president is always a roll of the dice (to use a Trump casino metaphor). We know what we will get with Hillary Clinton, including corruption at the highest level. Those foreign donors to the Clinton Foundation will undoubtedly expect something in return. With Trump we don't know for sure what we'll get, beyond promises he has made and some contradictory positions he has taken. We can only hope that good people will serve and surround him, including running mate Mike Pence and the policy wonk Newt Gingrich.

Only one candidate for president is capable of overturning the "money changers" in Washington. The political, governmental and media elites have had their chance to turn things around and they have failed. Now it's time for Trump.

I just hope I don't have to eat my words.