Cal Thomas
|
Posted: Jul 30, 2016 12:01 AM
Share   Tweet
The opinions expressed by columnists are their own and do not necessarily represent the views of Townhall.com. 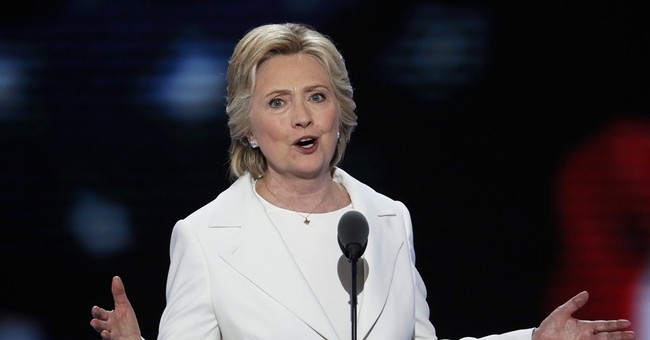 Environmentalists should be pleased with Hillary Clinton's acceptance speech at the Democratic National Convention Thursday night, because it was largely recycled talking points we have heard for decades.

Putting aside the theatrics designed to make Hillary Clinton appear to be something she is not -- the white pantsuit was a nice touch, as white is traditionally the color of purity and also the color of the suffragettes -- we've heard it all before.

First there was the charge that Republican presidential nominee Donald Trump cannot be trusted with the nuclear codes. The same was said about Ronald Reagan in 1980. Democrats called him a "cowboy" who might blow up the world. Instead, he rebuilt America's military, as Trump has promised to do, and helped bring down the Soviet Union. Can Hillary be trusted with classified documents?

What would an acceptance speech by a Democrat be without promises of more programs? She'd have done better listing past and current programs that have not worked and vowing to get rid of them. But that's not the way of Democrats. They pile on more programs so distracted voters won't notice the failure of the old ones. For the left, intentions matter more than results.

Hillary Clinton's proposals will add hugely to the debt, now approaching $20 trillion. But wait. She will pay for all this new stuff by taxing those obscenely wealthy Wall Street people, who paid her and her husband millions to speak to them. No one knows what about. She won't release the transcripts.

Americans for Tax Reform (ATR) has analyzed Clinton's proposed $1 trillion list of tax increases. They include:

-- Increasing income taxes by $350 billion in the form of a 28 percent cap on itemized deductions.

-- Businesses would be slapped with a tax hike of $250 billion through "undefined business tax reform."

-- There's the euphemistically named "fairness tax" of $400 billion she says would restore "basic fairness" to our tax code and an increase in the death tax. Real fairness would eliminate the undecipherable tax code and replace it with a fair tax, but Democrats would never go for that.

ATR notes: "...there are even more Clinton tax hike proposals not included in the tally above. Her campaign has failed to release specific details for many of her proposals. The true Clinton net tax hike figure is likely much higher than $1 trillion." Read more at: http://www.atr.org/full-list-hillary-s-planned-tax-hikes.

To my surprise, many in the mainstream media, who couldn't stop talking about the historical significance of the first woman nominated for president by a major political party, thought her speech fell flat. Robert Draper of The New York Times tweeted: "Not well written, not well delivered." Tom Bevan of Real Clear Politics tweeted: "Clinton is giving the eighth best speech of the convention." Ben Dreyfuss of the far-left magazine, Mother Jones, tweeted: "This speech isn't great."

Despite the claims of her husband that she is the best "change maker" he's ever known, change was what President Obama promised, but failed to deliver. She would be Obama's third term.

Polls increasingly indicate a majority of voters want real change this time around. More people are being drawn to Trump's message that the political system is rigged and that Hillary Clinton is "crooked."

It's difficult to disprove a negative, especially when the public has made up its mind. The latest Wall Street Journal/NBC News analysis has found that one-fifth of Democrats view her unfavorably, "more than any previous Democratic presidential nominee on the eve of their party's convention."

Donald Trump also suffers from high negatives, but because of Hillary Clinton's thin record of accomplishment she will have to tear down Trump because as Kimberley Strassel concludes in her Wall Street Journal column, "It's Hillary against Hillary. This November is about whether Americans can look at 40 years of Clinton chicanery and nearly a decade of broken Obama promises, and still pull the lever for her."

It's going to be a formidable task to try to recycle Hillary Clinton.