Pence Is Salt To Trump's Pepper

Cal Thomas
|
Posted: Jul 19, 2016 12:00 AM
Share   Tweet
The opinions expressed by columnists are their own and do not necessarily represent the views of Townhall.com. 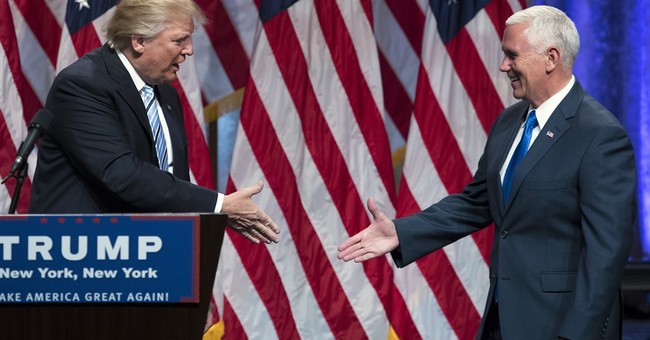 The announcement by Donald Trump of Indiana Governor Mike Pence as his running mate had not yet been made official last Thursday, but that didn't stop the hard left from hauling out its familiar and overused rhetoric.

Ilya Sheyman, executive director of MoveOn.org Political Action, released a statement which said, "If Trump picks extreme right-wing Governor Mike Pence as his running mate, he will be doubling down on his divisive and hate-filled approach to politics." Funny how turning people against each other is, for the left, a one-way street. When the left wants to obliterate history, tradition, biblical teachings and even common sense it never sees itself as divisive. Conservatives are supposed to accept their agenda without complaint.

Pence has the government experience Trump lacks. He spent a decade in the House of Representatives and has been governor for the last four years. Yes, he was blindsided by the business community's reaction to his signing the Religious Freedom Restoration Act, which would have allowed businesses to deny service to the LGBT community on the basis of religious beliefs. And yes, it could be argued -- and was -- that he looked weak as he backtracked in face of heavy opposition and signed an amended bill passed by the Republican majority legislature allowing local governments to add protections for LGBT people.

Pence has the temperament critics say Trump lacks. He is an evangelical Christian, which should appeal to that base whose members have been troubled by Trump's marital history, his rhetoric about women and his unfamiliarity with scripture.

Pence's record as governor is a profile in conservatism: a 5 percent reduction in the state income tax; a reduction in the state corporation tax from 6.5 percent to 4.9 percent (that must have appealed to Trump who wants to cut corporate taxes to return jobs to the U.S.) and an increase in the state labor force which according to the governor's office, by the end of 2014, had grown by more than 51,000 over that year. That was five times the national growth rate.

Here's what he told me in a December 2014 interview in his Indianapolis office: "The Republican Party has become just the other party to Washington solutions. We have to get back to advancing state-based solutions and reforms. We must be relentlessly optimistic." Channeling power from Washington back to the states is another announced Trump priority.

There is something else that will appeal to Trump and a lot of poorer Americans with children trapped in failing schools because Democrats won't let them escape due to pressure and donations from the teachers unions. As governor, Pence set a goal of getting 100,000 more Indiana students in high-quality schools by 2020. The objective, he told me, is to "fix traditional schools, as well as expand the state's educational voucher program, the largest in the country."

Pence said he believed 2016 "will be the first foreign policy election since 1980." He was right.

During our interview Pence refused to describe President Obama's time in office as a failure, saying it has only been "disappointing." Don't look for him to be as judicious during the campaign because he has many reasons not to, including the administration's poor record on fighting terrorism.

Modest, self-effacing and a man of deep faith in God and America, Pence will be salt to Trump's pepper.