Cal Thomas
|
Posted: Feb 25, 2016 12:01 AM
Share   Tweet
The opinions expressed by columnists are their own and do not necessarily represent the views of Townhall.com. 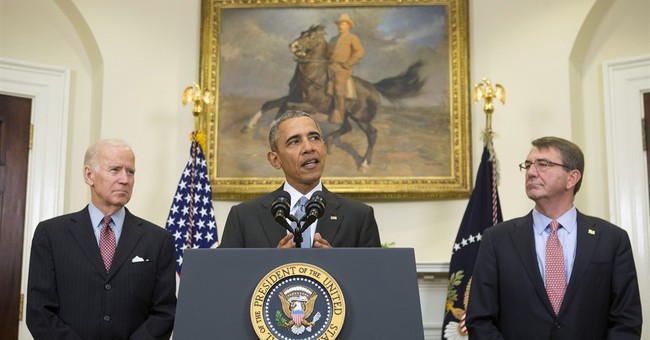 Everyone knows the meaning of the word "hypocrite" and no one can claim absolute constancy when it comes to living a life consistent with one's stated values. But in this election year, hypocrisy is on full display. It is now being practiced with neither shame nor irony by leading Democrats, who once forcefully argued positions they have now abandoned.

Definitions help focus the mind and so here is one for "hypocrite" from dictionary.com: "a person who feigns some desirable or publicly approved attitude, especially one whose private life, opinions, or statements belie his or her public statements."

That seems to fit Sen. Charles Schumer (D-NY) and Vice President Joe Biden (hypocrite-Washington), who now take positions opposite ones they previously took with apparent conviction when it comes to hearings and votes on a president's nominees to the Supreme Court.

In 2007, Schumer delivered a speech to the American Constitution Society in which he said, "We should not confirm any Bush nominee to the Supreme Court except in extraordinary circumstances. They must prove by actions not words that they are in the mainstream rather than we have to prove that they are not."

That speech came 543 days before the 2008 election. Schumer now says the Senate should hold hearings and that the full Senate should be allowed to vote on President Obama's forthcoming nominee to replace the late Justice Antonin Scalia, though fewer than 300 days remain before this year's election. Schumer brushes off charges of hypocrisy, saying any comparison of his position then and his polar opposite position now is "apples and oranges."

Vice President Biden is also caught in a hypocritical trap of his own making. In 1992, while serving as chairman of the Senate Judiciary Committee, Biden said that in the event a vacancy on the Supreme Court should occur during a year when President George H.W. Bush was seeking a second term, Bush should "not name a nominee until after the November election is completed." Biden also took the exact position then that the current chairman of the committee, Sen. Charles Grassley (R-Iowa), is taking now. In 1992, Biden said his committee "should seriously consider not scheduling confirmation hearings on the nomination until after the political campaign season is over."

Biden said such consideration would be "unfair to the president, to the nominee, or to the Senate itself. Where the nation should be treated to a consideration of constitutional philosophy, all it will get in such circumstances is partisan bickering and political posturing from both parties and from both ends of Pennsylvania Avenue."

Those previous arguments by two leading Democrats are now being recycled by Republicans. Biden today explains his 1992 remarks were "hypothetical." No, they were hypocritical, given his current contradictory position.

This helps explain why so many people hate Washington and why everyone gets my lecture circuit laugh line: "I'm from Washington, D.C., where the only politicians with convictions are in prison."

Republican members of Congress have been taking to the floor and reading excerpts from those not so long ago Schumer and Biden speeches. They should continue to do so, making their positions then, the test now. And should the situation be reversed in the future, with a Republican president and a Senate with a majority of Democrats, Republicans should remember the positions they are taking now, or risk being called hypocrites.

It is a label that is commonly and increasingly bipartisan.