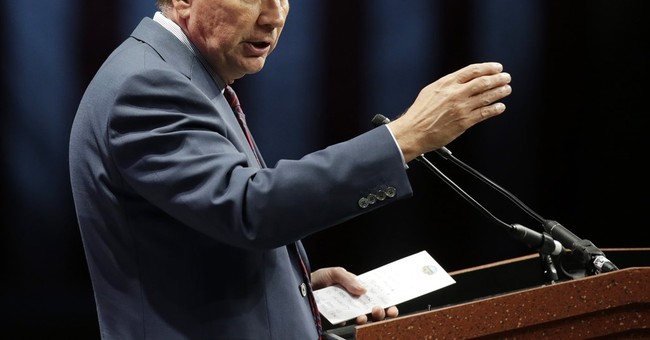 Conservatives are supposed to be against big government and opposed to the left's belief that problems can and should be solved by Washington.

Which is why Ohio governor and Republican presidential candidate John Kasich's proposal to create a new government agency to promote "Judeo-Christian values" is a really bad idea.

Put aside for a moment that the federal government does few things well, or within budget, and consider also how preposterous and unworkable such an idea would be.

In a speech at the National Press Club in Washington last week, Kasich, who grew up Catholic and remains a man of Christian faith, said he thinks the U.S. needs such an agency to help the country be "more forceful in the battle of ideas." He added, "U.S. public diplomacy and international broadcasting have lost their focus on the case for Western values and ideals and effectively countering your opponents' propaganda and disinformation."

Here is a short list of the many problems with such a proposal.

Problem No. 1: Who would represent the "Judeos" and the "Christians"? Would it be an Orthodox or reformed Jew? Would a Jewish mystic from the Kabbalah sect be included? There are numerous Christian denominations and sects, so how would Kasich select one as representative of Christianity? Would those left out protest? Would there be lawsuits, not only from excluded religious groups, but from the ACLU? Church-state separation, you know.

Problem No. 2: What "values" would be promoted? Certainly not, one would hope, cultural values, as displayed in many Hollywood films and on television. Are the "traditional values" Kasich supports even practiced by a majority of Americans in an age when we seem to tolerate everything (except traditional values) and when the Kardashians take up far too much brain space? Who would be the ultimate decider on which "values" to promote? And what about people who seek to promote values different from Kasich's?

Problem No. 3: Do we really want to turn over what ought to be the responsibility and privilege of individual religious believers to the federal government, which can't even save dollars taken from taxpayers, much less the souls of individual citizens? Too many churches, especially, have retreated from their responsibility to apply their faith to those who are hungry, homeless and imprisoned. Tax-exempt ministries now do the work individuals have been commanded to do.

Problem No. 4: How do you promote American "values" to secular and Islamic societies, which mostly do not share them? Who has the credibility to speak for and represent such values, even if they could be agreed upon?

A president can promote values by talking about them and endorsing individuals and programs that practice them. The Voice of America and Radio Liberty used to broadcast American values to the world during the Cold War, but in the Internet age, broadcasting, which can be easily jammed, is probably not as effective as the web.

In order for a country to promote something, it must first practice it. A better idea would be to allow school choice so that poor children especially can be liberated from failing public schools and given a chance for a better life. A good education is a value that can be enhanced by the federal government getting out of the way and busting the last major monopoly in the country: public education.

Kasich rightly laments the loss of some core values most Americans once embraced. It wasn't the federal government that got rid of most of them -- though the Supreme Court played a role. Rather, it is we the people who have chosen to live by different values to our detriment and shame. If they are to return, it will take the work of those "Judeo-Christians" and not the dysfunctional federal government.