Repeating Myself on an Iran Nuclear Deal 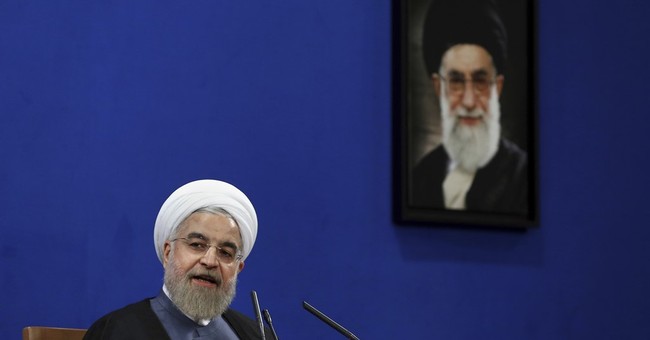 Am I allowed to repeat myself when it comes to the negotiations over the U.S.-Iran nuclear deal?

Why not, since that is what Iran's leaders are doing. They are repeating themselves by refusing inspections of some of their facilities where only a fool would believe nuclear weapons are not under construction. They are repeating themselves when they demand all sanctions be lifted on the day any deal is signed. And let's not forget Iran's weekly "Death to America" chants at Friday prayer services, though publicly politicians in Tehran are said to denounce them. Why would anyone in his right diplomatic mind believe anything these subsidizers of terrorism say, especially when they appear to believe their religion requires them to build a bomb, obliterate Israel, eliminate America and subject the world to Sharia law?

U.S. officials, from President Obama, to Secretary of State John Kerry, repeat themselves with empty assurances that the deal, if it comes after the latest "deadline" has passed, will be a good one for America and the world. Trust them, they repeatedly say. Yet each time Iran stands up to the U.S., American officials appear to back down.

Stephen F. Hayes of the Weekly Standard has listed some of the many contradictory statements made by American leaders about Iran's nuclear program.

In 2012, notes Hayes, The Obama administration demanded -- yes, demanded -- that nuclear facilities at the secret Fordo site be closed. At the end of 2013, President Obama repeated the administration's position: "We know they don't need an underground, fortified facility like Fordo in order to have a peaceful program."

But on April 22 of this year, the president was quoted by The New York Times as saying, "Under the preliminary accord, Fordo would become a research center, but not for any element that could potentially be used in nuclear weapons." So Fordo gets to stay open, maybe as a tourist attraction, or research library for terrorists?

But on March 19 of this year, the Associated Press quoted Vietor saying: "Agreement on Iran's uranium enrichment program could signal a breakthrough for a larger deal aimed at containing the Islamic Republic's nuclear activities." The tentative deal imposes "limits on the number of centrifuges Iran can operate to enrich uranium." But it would still allow Iran to continue enrichment.

The United States is in retreat around the world and is perceived as weak by her enemies, including not only Iran, but Russia, which continues its aggression toward Ukraine, and China, which is building new islands in disputed waters in the South China Sea, probably to be used as military bases.

I have yet to hear from a U.S. government official why anyone can trust an Iranian regime whose dictatorship kills its own people, conducts secret trials, and openly and proudly states its god wishes everyone who disagrees with its version of Islam eliminated from the planet.

Assurances that inspections will keep Iran from cheating are meaningless if the regime hides its nuclear weapons in places where they won't allow inspections. Since Iranian leaders believe the Koran allows them to lie to "infidels" in pursuit of their goals, could someone please explain how any agreement with liars forces them to stop lying? Why would they counteract what they believe to be direct orders from their god if doing so, according to Islamic doctrine, would place them in danger of hellfire?

In asking these questions, I repeat those asked in previous columns.

Not so the U.S., which keeps changing its position while pursuing an unenforceable goal with an unverifiable agreement.