Bill Clinton and the Company He Keeps 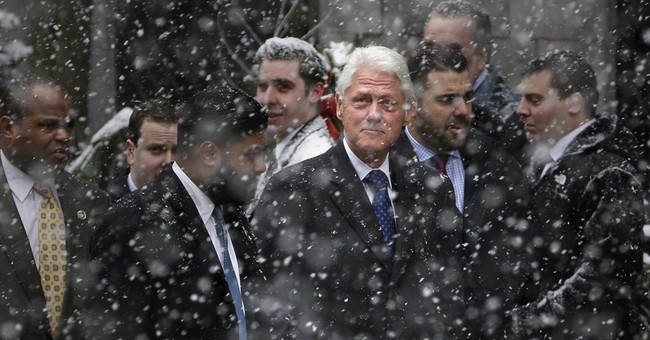 It is from an Aesop fable we get the phrase, "A man is known by the company he keeps."

In court papers filed recently in the Southern District of Florida, a woman, identified as Jane Doe 3, alleges Epstein forced her, from the age of 15, to have sex with rich, prominent men. In addition to naming Prince Andrew in the suit, Jane Doe also named high-profile attorney Alan M. Dershowitz, who called the claim "outrageous and impertinent."

Daily Mail.com reports Epstein went to great lengths to stop the underage girls from speaking to the FBI. Virginia Roberts, now 30, believed to be Jane Doe 3, says she was underage when Epstein ordered her to have sex with Prince Andrew. She also claims to have been a part of a prostitution ring organized for Epstein by Ghislaine Maxwell, daughter of the late and disgraced press baron, Robert Maxwell. Maxwell, predictably, has denied she recruited girls for Epstein.

Beyond the interest in the tawdry doings that reportedly included an A-list of actors, lawyers and politicians, is the impact this saga could have on a Hillary Clinton's presidential candidacy. Roberts is reported in the British press to be considering a "tell-all" book. If it contains any verifiable facts about Bill Clinton and underage, or even of-age women, voters may be reluctant to return him to the White House in a "first man" capacity. They also may not want to be dragged through another chapter in the long-running Clinton soap opera.

Bill Clinton's sexual proclivities have been long reported and voters seemed willing to tolerate them because his wife did. Sympathy for his inamoratas was pretty much nonexistent. Clinton supporters branded them all predators, liars and gold diggers.

That Bill Clinton could get re-elected after having sex with Monica Lewinsky in the Oval Office, lying about it under oath and being impeached by the House says as much about the declining expectations for politicians as it does the moral state of our union.

The former president exhibits many of the symptoms of a classic sex addict. Writing on Psychcentral.com, Michael Herkov, Ph.D., defines sex addiction as "...a progressive intimacy disorder characterized by compulsive sexual thoughts and acts. Like all addictions, its negative impact on the addict and on family members increases as the disorder progresses. Over time, the addict usually has to intensify the addictive behavior to achieve the same results."

Based on what we know about Clinton's behavior extending at least back to his days as governor of Arkansas and the various women who have publicly accused him of unwanted sexual advances (Paula Jones and Juanita Broaddrick) or willingly having sex with him (Gennifer Flowers and most likely others) does this not describe Bill Clinton?

If this story advances and facts are substantiated, it will be difficult for Clinton defenders to label the women "bimbo eruptions," as they did in 1992. Given his lies about Lewinsky, finger-wagging denials won't cut it this time. Democrats will want to know whether this presents a problem for them in 2016 before they consider nominating Hillary Clinton for president.

Aesop was right. That Bill Clinton kept company with Jeffrey Epstein only adds to what we already know about the former president, but this case, if true, will take things to a new and even lower level.