The Nixon Resignation at 40 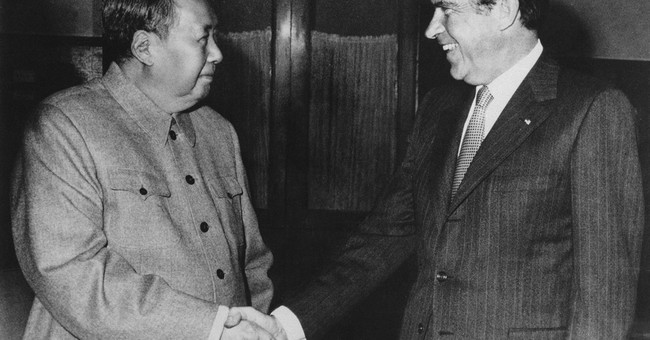 On the occasion of this week's 40th anniversary of Richard Nixon's resignation from the presidency, The Washington Post sponsored a reunion featuring Bob Woodward and Carl Bernstein, the Watergate reporters who "brought down" the 37th president.

In fact, Nixon committed political suicide. He thought he could get away with what other politicians had done, but forgot the rules are different for Republicans.

The Post event resembled a celebration with much laughter and stories about how Publisher Katharine Graham and Executive Editor Ben Bradlee had told the newsroom "no gloating" when it became apparent Nixon would resign. But gloat they did for years to come.

The story of how Lyndon Johnson “stole” the 1948 Senate election away from Coke Stevenson, allegedly by use of voter fraud, which, The New York Times writes, allowed him to overcome "...a 20,000-vote deficit to achieve his famous 87-vote victory," is chronicled in Robert A. Caro's book "Means of Ascent," a multi-volume biography of the 36th president. It is also no secret how Kennedy money and, according to journalist Seymour M. Hersh in his book "The Dark Side of Camelot," a little mafia influence delivered the 1960 presidential election to John F. Kennedy.

These men were Democrats and though Johnson's legacy is tarnished by his escalation of the Vietnam War, he deservedly earns plaudits today for his work on civil rights legislation.

Nixon was different. While Kennedy expertly schmoozed the press and Johnson was a master manipulator and arm-twister, Nixon brooded about slights and injustices he felt had been done to him.

When Pat Nixon died in 1993, I wrote a column about her. I had met her on a few occasions and said she did not fit the "plastic Pat" label assigned to her by critics. I noted she didn't like politics, but endured it for the sake of her husband, preferring instead to stay out of the limelight.

Nixon wrote and thanked me, but then launched into a diatribe about the media and how they never understood her and by implication him.

My other personal remembrance of Nixon came in the early 1970s. I was trying to become a network correspondent at NBC News in Washington and was assigned to weekend stories more seasoned reporters didn't want to cover. One of them was Nixon's Sunday White House “church” service. Bob Schieffer had recently arrived in Washington from Texas for CBS News and he drew the same assignment.

Nixon, or someone on his staff, likely pre-cleared the speakers in order to avoid the potential embarrassment of one of them criticizing Nixon for not immediately ending the Vietnam War. Speakers included Rev. Billy Graham and a Catholic prelate whose name now escapes me. Afterward, a reception was held in the East Room where reporters and guests could speak with Nixon, Secretary of the Treasury John Connally and other Cabinet members.

I found these events uncomfortable and a contrast in content and form from my own church experience. An explanation came when the secretly recorded Oval Office conversations became public and Nixon is heard taking God's name in vain and disparaging Jews and his "enemies." On hearing the tapes, Graham expressed shock and dismay at Nixon's language, though on one recording Graham is heard agreeing with Nixon about Jews controlling the media, a comment for which he later apologized.

Nixon defenders have always contended that he did nothing different from other presidents. Maybe, but he certainly appears to have done a lot more of it than other presidents and his personality was anything but endearing to the press and to those on his "enemies list." Nixon seemed to be saying to the press, "hit me again, I can take it.

Nixon was not a conservative Republican. He imposed wage and price controls, created the Environmental Protection Agency and two of the four justices he appointed to the Supreme Court -- Harry Blackmun and Warren Burger -- were part of the 7-2 majority vote in the Roe v. Wade case, which ushered in abortion on demand.

Still, he remains one of our most fascinating presidents and one we can be sure historians will "kick around" for at least another 40 years.