No More Aid to the Palestinian Authority 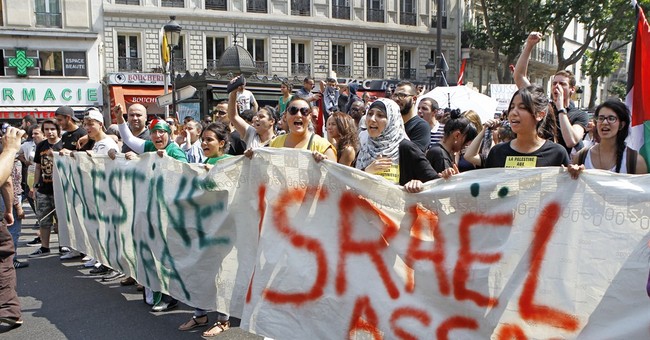 The anti-Semitic "tradition" of blaming Jews for the world's problems mostly took a temporary back seat in light of the indiscriminate rocket attacks on Israel by the terrorist group Hamas.

Major newspaper editorials condemned Hamas, but their condemnation was hedged by calls for "restraint" on "both sides" and "proportionality" in Israel's response to the attacks. There is little or no mention of Hamas' directive to ignore Israel's warning to leave homes in areas where the rockets have been placed among civilians. The Hamas strategy is to parade the bodies of the dead before TV cameras to demonstrate Israel's "cruelty" and uncaring attitude toward innocent lives.

Still, there was room for the predictable screeds against Israel. The New York Times gave space on its op-ed page to Nathan Thrall, a senior analyst at the International Crisis Group covering Gaza, Israel, Jordan and the West Bank. Thrall writes, "Israel and much of the international community placed a prohibitive set of obstacles in the way of the Palestinian 'national consensus' government that was formed in early June."

The Times of Israel reported on a pro-Palestinian demonstration in Berlin -- yes, Berlin -- during which crowds reportedly chanted "Jew, Jew, cowardly pig, come on out and fight." They might as well have chanted "Sieg heil."

Hamas is a designated terrorist organization that is religiously and politically committed to the eradication of Israel. That it formed a coalition with the Palestinian Authority (PA) and its supposedly "moderate" leader, Mahmoud Abbas, doesn't make Hamas more moderate; it underscores the true ideology of the PA.

The Guardian newspaper printed a column by associate editor Seumas Milne, the gist of which was, "The idea that Israel is defending itself from unprovoked attacks from outside its borders is an absurdity." Occupied people, like the Palestinians of Gaza, Milne writes, "...have the right to resist, by force if they choose."

Yes, Gaza is occupied, but by Hamas, not Israel, which withdrew in 2005 and created a vacuum Hamas predictably filled.

Writing in The Jerusalem Post, Caroline Glick notes the objectives of Hamas, which has vowed never to make peace with Israel: "In the midst of Operation Protective Edge, Hamas released a music video in Hebrew calling for the Palestinians to bomb Israel and kill all Israelis. 'Raze it (Israel) to the ground, exterminate the cockroaches' nest, and banish all the Zionists,' the lyrics read."

While the United States has limited options in the region, it does have one that could help undermine Hamas and free Gaza from its real occupiers. The U.S. should eliminate financial aid to the Palestinian Authority, which has been provided in the false hope that "moderation" would prevail over terrorism. According to the Congressional Research Service, "Since the establishment of limited Palestinian self-rule in the West Bank and Gaza Strip in the mid-1990s, the U.S. government has committed approximately $5 billion in bilateral assistance to the Palestinians, who are among the largest per capita recipients of international foreign aid." What have we gotten for it?

A bill sponsored by Sen. Rand Paul (R-KY) would prohibit any direct U.S. assistance, loan guarantee, or debt relief to the PA so long as it is affiliated with Hamas. The bill is currently tied up in the Senate Foreign Relations Committee. It should be voted out and debated by the full Senate.

Last year Edwin Black, writing in The Times of Israel, reported that "Each year, American aid and financial programs fungibly fund terrorist salaries paid by the Palestinian Authority. This astonishing financial dynamic is known to most Israeli leaders and Western journalists in Israel. ... But it is still a shock to most in Congress, who are unaware that U.S. money going to the Palestinian Authority is regularly diverted to a program that systematically rewards terrorists with generous salaries."

Now that the Palestinian Authority has formally aligned with Hamas and its murderous objectives, which in reality are little different from theirs, despite its outward claim that Israel has a right to exist (how tolerant of them), ending U.S. aid might get their attention.

There is no moral equivalency between Israel and those who wish to destroy the Jewish state. None. Stopping aid to terrorists would be the best policy option.