Islamists Not Ready For Democracy 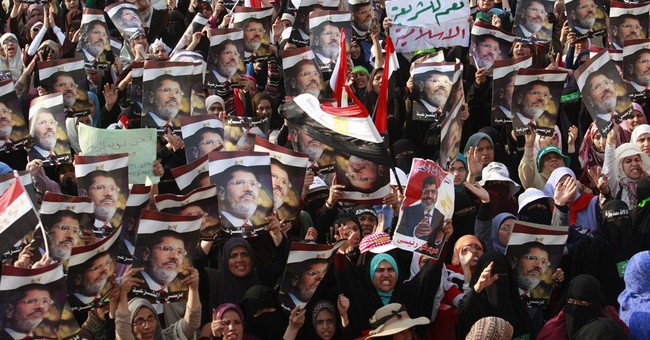 The military coup that ousted Egyptian President Mohamed Morsi marks another failure in U.S. foreign policy over several administrations, which have erroneously promoted the notion that American-style democracy in Islamic lands will produce a nation more like ours.

The Founders wrote a Constitution. When properly read and obeyed, it guards against pure democracy and makes "we the people" subject to laws that cannot be abolished by popular vote. Benjamin Franklin properly called what the Founders wrought a "Republic." Representative government would guard against the passions of a majority. No such safeguards apply in Egypt, or for that matter throughout most of the Islamic world.

George W. Bush famously said that freedom beats in every human heart. To paraphrase Bill Clinton, it depends on the meaning of freedom.

Definitions are important. To a radical Islamist, Sharia law defines freedom. Constitutions guaranteeing equal rights for all, including religious minorities like Coptic Christians in Egypt, multiple parties and free speech are mostly absent from societies where Islamists rule. And so majorities, often followed by the mob, and then the army, rule.

Secretary of State John Kerry spent most of his recent visit to the Middle East focusing on the establishment of a Palestinian state. This failed policy is a sideshow and irrelevant to the turmoil throughout the region. The Obama administration is calling for an "inclusive" political process in Egypt, which would include a role for the Muslim Brotherhood. But the Muslim Brotherhood's radical religious outlook and earthly agenda are the problem, not the solution. Why should the United States expect a different government if a different "brother" is elected, or if Morsi is somehow re-instated?

How can Egypt have a stable government when the Brotherhood claims to be doing the will of God at the same time the military says it carried out God's will by removing Morsi, and secularists say they don't want Islamists governing Egypt?

Writing in the UK Daily Telegraph, Fraser Nelson, editor of the Spectator, says the Arab world needs capitalism, more than democracy. He suggests that Western aid to Egypt be conditioned upon property rights. Throughout the Arab world, he writes, bureaucracy and corruption keep many people from starting businesses without paying costly bribes: "...under Hosni Mubarak, for example, opening a small bakery in Cairo took more than 500 days of bureaucracy. To open a business in Egypt means dealing with 29 government agencies. The same story is true throughout the region: The average Arab needs to present four dozen documents and endure two years of red tape to become the legal owner of land or business. If you don't have the time or money for this, you are condemned to life in the black market: No matter how good you are, you will never trade your way out of poverty."

The right to own property was fundamental to America's founding. In the beginning, only white male property owners were allowed to vote. Discriminatory, yes, but the point about the importance of being invested in the new nation by literally owning a piece of it was thought to be a fundamental component of citizenship.

American policy in the Middle East has failed over many decades because of false assumptions, especially when it comes to Israel. While often treating that tiny land as a weed that ought to be dug up, rather than a flower in the desert to be nourished, U.S. policy has focused on placating Arabs and Muslims, many of whom wish to destroy Israel and America.

Perhaps now that the United States is rapidly headed toward energy independence (enhanced if the opposition to the Keystone pipeline and fracking can be overcome), this and future administrations won't feel the need to bow to Middle East dictators and will push a "re-set" button that has a better chance at succeeding than the one that for too long has been stuck and inoperative.