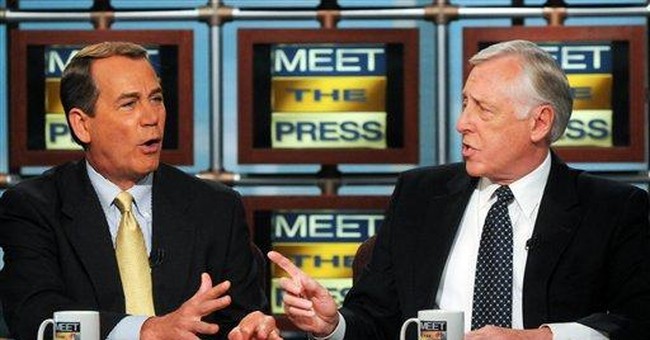 Hillary Clinton did it and it worked for her when she ran for the Senate in New York, so now Republicans will give it a go. It's the listening tour, except unlike Hillary, who traveled from town to town, Republicans plan to stay in one place and invite you to come to them.

House Republicans announced on Tuesday a new Website (www.americaspeakingout.com). It invites people to submit their ideas in five categories: American prosperity, fiscal accountability, American values, national security and an "open mic" section on which you can recommend anything not covered by the other four.

I do not wish to discourage anyone from asking for good ideas, but isn't this what we elect our representatives to do? If they have run out of good ideas that work and can improve the country, maybe it's time for them to leave office and allow people with good ideas to serve in their place. Given the toxic nature of our politics, what makes anyone think that a good idea from a Democrat would be accepted by a Republican and vice versa? Would it even be labeled "good" if the idea came from the opposition? I doubt it.

Are we the first generation out of the cave? Has nothing been tried before? We know what works and what doesn't. Is there any doubt that we are under a crushing load of debt because we spend too much on "entitlements" that are really just bribes for votes? Aren't individual liberty and economic independence good ideas?

A surgeon wouldn't ask patients in a hospital for suggestions on how to perform an appendectomy. Why, then, are Republicans asking the public to do their job?

But since they asked, here are some recommendations:

Economy: If Republicans regain power, they should promise to immediately declare a national fiscal emergency during which every federal program and agency, including every "entitlement," will be required to justify its continued existence. If it cannot do so, it should be eliminated. People must be told that the gravy train isn't going to stop at their station any longer so they'd better get about the business of taking care of themselves and their families. This will hurt, at first, like quitting nicotine or caffeine cold turkey, but the end result will be independence.

This might also require us to redefine the "American Dream," which ought to be less about accumulating stuff and more about acquiring character. That worked for previous generations.

Education: Money doesn't improve grades. Eliminate the Department of Education and reduce school staff (not good teachers). Allow for school choice. The initial focus will be on disadvantaged children who have proven that they can learn in the right environment and with the proper encouragement and motivation. The cycle of poverty will be broken and African Americans, especially, will thank Republicans by returning to their pre-Roosevelt roots and voting for them out of gratitude for saving their children.

Social issues: With the exception of adultery and physical abuse, divorce should be made more difficult and so should marriage. People should be required to see a counselor before marrying or divorcing. The social cost of divorce has been staggering. It should be discouraged. Abortion should also be discouraged and every woman who thinks she wants one should be required to view a sonogram of that which she is about to terminate. That would save many aborted babies and increase the number of taxpayers.

National defense: National defense begins with going after those who are going after us. Yes, we intend to identify, pursue (and deport from America) those terrorist leaders who use religion as an excuse to murder innocent civilians. Never has "the best defense is a good offense" had greater meaning.

These are some of my ideas, Republicans. I have more (including health care), but do these and the rest won't be necessary. Don't you already know these things? If so, what's the point of the Website?