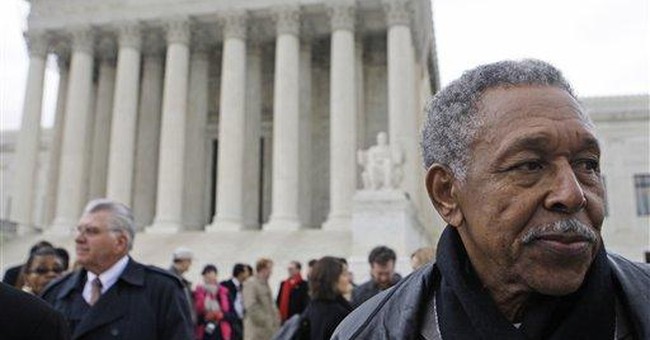 The Supreme Court has decided to take a case that may change the boundaries for types of speech protected by the First Amendment.

The case was brought by a Maryland man whose son's 2006 funeral was picketed by members of the Westboro Baptist Church in Topeka, Kansas. Members of the "church" consist of "pastor" Fred W. Phelps Sr., and his family who preach a false doctrine that basically claims American soldiers are dying in combat because of this country's increasingly tolerant attitude toward homosexuals. "Semper Fi F---" and "Thank God for dead soldiers" are two of the more outrageous signs displayed by members of the Westboro church at services for some of our war dead.

I put "pastor" and "church" in quotations on purpose. Others -- one thinks especially of "pastors" who preached segregation and barred blacks from their "churches" at one time -- have caused ridicule to be directed at believers in God, but the Phelps case may descend to an even lower level of evil.

The history of the case is this: a jury in Baltimore awarded Albert Snyder more than $10 million in damages. The amount was reduced on appeal and the case was eventually thrown out by the 4th Circuit Court in Richmond. That panel of three judges said the picket signs could not be reasonably understood to be referring directly to Snyder and his late son, Marine Lance Corporal Matthew A. Snyder. The court said as distasteful as Phelps' rhetoric is, the expressions are part of a national debate on homosexuality and so it is protected speech.

I called Nat Hentoff, who is regarded by many as an authority on the First Amendment and a fierce defender of all sorts of outrageous speech. Hentoff believes speech that might be construed as leading a person to act "is a clear disturbance of the peace at a religious or any kind of event" and thus "is not protected by the First Amendment."

Hentoff is right. The venue for military funerals is not a college campus or a political rally. Very often it is a church or synagogue. Even if it is a secular venue, the sexual behavior or orientations of dead soldiers and their families are unknown to the Phelpses, who are using a family's grief to advance a judgmental attitude that is rejected in the Scripture in which they claim to believe. Someone should remind them that the Devil could quote Scripture, too.

Several years ago, members of the Phelps family picketed a prayer breakfast in Topeka at which I was the main speaker. Sitting next to me was then-Kansas governor (now Health and Human Services secretary) Kathleen Sebelius. I was vaguely familiar with the Phelpses but had never seen them up close and I asked the governor about them. I recall her saying, "Oh, don't worry about them. They picket everybody." At first I found them faintly amusing, but upon reflection I consider them deeply offensive, un-American and anti-Christian.

My speech was not curtailed and neither was theirs. The big difference was that the event at which I spoke was quite different from a funeral. Suggesting that a member of the military died because God is judging America for the way it treats homosexuals is worse than outrageous. It is the moral equivalent of crying "fire" in a crowded theater when there is no fire, which by the way is not protected speech.

The Supreme Court was right to take this case. It should rule in favor of the Snyder family and put a stop to Fred Phelps and his spiritually corrupt family. They are by no decent standard serving God. In fact, quite a good case could be made that they are in service to God's adversary.