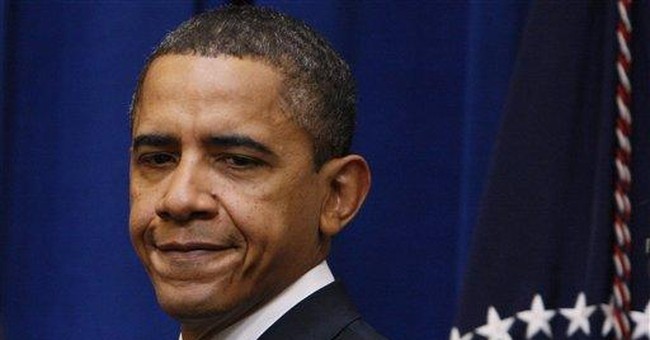 In his first comment following Scott Brown's stunning victory in the Massachusetts special election to fill the seat of the late Sen. Edward Kennedy, President Obama told the losing candidate, Martha Coakley, "you can't win them all." No, but President Obama hasn't won any since his own election more than 15 months ago (not counting the Nobel Peace Prize, which was an unearned gift). Three candidates he campaigned for in New Jersey, Virginia and Massachusetts lost, and his personal appeal for Chicago to host the Olympics in 2016 was rejected. That's 0-4. If he were a quarterback, the coach would be eyeing the backup right about now.

Many lessons were taught, but how many will be learned from Brown's victory? Chief among them is that the public doesn't like arrogance, whether it comes with a "D" or an "R" after the name. Democrats were taught that lesson in 1994 when voters gave Republicans a majority in the House of Representatives for the first time in more than 40 years. Republicans ran against arrogance and the tyranny of the majority. But they quickly became what they replaced, believing that voters had given them a license to do whatever they wished.

It seems President Obama and the congressional leadership both need to be taught the same lesson. Speaker Nancy Pelosi isn't getting the message. She is promising to push through health care "reform" no matter what. Her San Francisco seat is safe, but the seats of many other Democrats -- especially those Blue Dogs and Democrats who won in traditionally Republican districts -- are not. Will those Democrats be willing to play "Thelma and Louise" and drive off a cliff just so the Obama-Pelosi-Reid wing of their party can claim victory?

President Obama's poll numbers, which have been sinking almost since his inauguration, will not be helped if he refuses to change course. Washington Post political reporter Chris Cillizza quoted a Democratic operative in the Post on Tuesday, "My message to my clients?" he said. "Jump ship now. ... Obama can't help you." Rep. Anthony Weiner (D-NY) advises his colleagues to "take a step back" from health care reform and focus on creating jobs. Sen. Evan Bayh (D-IN), up for re-election in November, reacted to the Brown victory: "There's going to be a tendency on the part of our people to be in denial about all this ... if you lose Massachusetts and that's not a wake-up call, there's no hope of waking up." Bayh added: "It's why moderates and independents even in a state as Democratic as Massachusetts just aren't buying our message. ... They just don't believe the answers we are currently proposing are solving their problems."

In 1966, Arkansas Democratic Senator J. William Fulbright wrote about the arrogance of power: "The attitude above all others, which I feel sure is no longer valid, is the arrogance of power, the tendency of great nations to equate power with virtue and major responsibilities with a universal mission." It is as true of individuals as it can be of nations. Some politicians arrive in office seeking to serve themselves and not the people and quickly forget why they were sent to Washington in the first place. They build empires to their egos and too quickly sell their souls to lobbyists and other bidders in the belief that re-election is the ultimate goal and highest good.

Anger isn't policy and Republicans must prove not only that Democrats are misusing their power, but also that if Republicans are given another chance at power, they won't again squander it on themselves. Humility is a light grace. The path to getting things done serves the people, not politicians.

The Massachusetts election showed that even in the bluest of blue states, "we the people" still means something. Voters in Massachusetts have jerked the chain of Washington politicians and reminded them who is in charge. This is what "the tea party" movement is about. Liberal Democrats dismiss it at their peril. Just ask Martha Coakley.