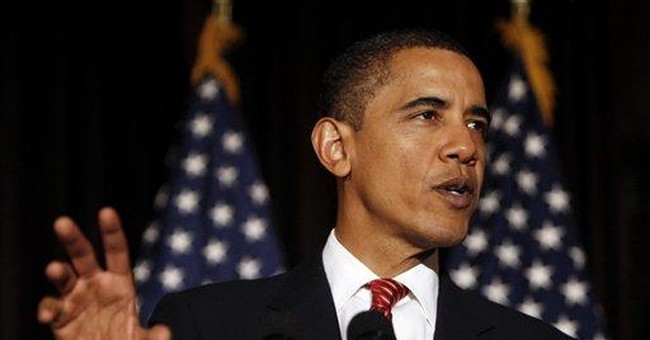 During the Cold War, the Voice of America and Radio Free Europe were among the broadcast entities that effectively penetrated the Iron Curtain to deliver truth to the "captive nations" that were being fed a steady dose of propaganda by their communist rulers. Those dictators did everything they could to "jam" the signals so that their people would only hear what their unelected overseers wanted them to hear. Contemporary versions of jamming and other forms of censorship occur today in Venezuela, Cuba and many other places where dictators believe public ignorance is essential to their unchallenged rule.

While the Obama administration is the product of an election, its approach to Fox News Channel, conservative talk radio and possibly the Internet appears similar to dictators who desire control over the flow of information in order to enhance their power.

The administration's primary beef appears to be that Fox is doing the job the broadcast networks and big newspapers should be doing were they not still deeply in the tank for this president and his policies.

Like those Cold War truth-tellers, Fox is simply delivering information to a rapidly growing audience (partly due to criticism from the White House) that wants to see and hear what the other media are not telling them. Fox -- and talk radio -- are reporting on the backgrounds and statements of Obama administration officials. Fox didn't create the statements and actions of Van Jones, the now former "energy czar," who signed a petition questioning whether Bush administration officials allowed 9/11 to happen as a possible pretext for going to war. Fox didn't force Jones to advocate for cop-killer Mumia Abu-Jamal, or associate himself with Standing Together to Organize a Revolutionary Movement (STORM), a left-wing radical group with Marxist roots.

No Fox News employee wrote the speeches and comments of White House Communications Director Anita Dunn, who told graduating high school seniors that one of her "favorite philosophers" is the mass murderer Mao Zedong. Neither did they compose her boast during the campaign that the Obama people "controlled" the news media.

ACORN might never have been exposed for its possibly illegal activities had not an enterprising young duo gone to their offices with a hidden camera and recorded some ACORN workers who were happy to assist them in breaking the law.

As one who appears on Fox as a contributor, I have seen the network grow from its beginning more than a decade ago to its current position of holding accountable those in power. That was once the calling of all journalists until the Kennedy years when reporters started cheerleading and socializing with the people they were empowered to question and cover. This shift in responsibility has greatly enhanced the status and income of too many journalists and commentators. It has also shortchanged the profession and the public it is supposed to serve.

It is no mystery why the White House has made Fox News a target. If its reporting and commentating were not effective in exposing things the administration does not want the public to know, Fox would be ignored. But it is increasingly effective because the public is sensing that the administration has a lot to hide about its personnel, ideology and objectives.

Rather than boycott Fox -- if the administration were smart -- it would flood the network with its spokespeople. The administration apparently believes it needs an enemy to avert scrutiny from its socialist agenda, the undermining of free speech and the corruption of the U.S. Constitution. Because Republicans have no credible national leader, the administration has settled on Fox News.

Political leaders, going back to our founding, have criticized the press. It never works, because after the politicians leave office, the press remains. If the administration is seeking approval for its policies, it should go on the only channel that will confront, examine and question those policies. If the policies are valid, they will stand; if not, they won't and they shouldn't. But perhaps, like those dictators, the administration would rather jam Fox's "signal" because they don't want the public to know the truth about what they are doing.