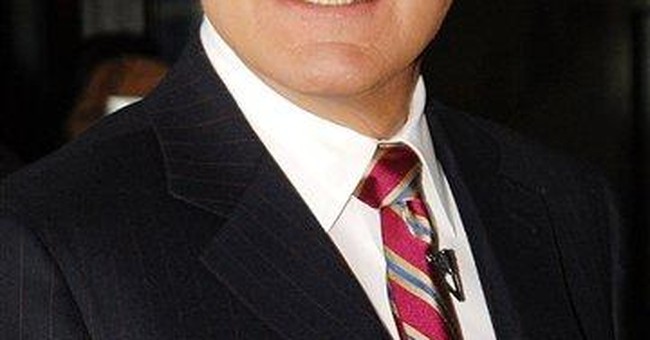 In olden days when "a glimpse of stocking was looked on as something shocking" there was a morals clause written into an actor's film contract. The purpose was to restrain an actor from engaging in public behavior that might offend the audience and harm ticket sales.

Today, lewd and crude behavior can boost ticket sales and TV ratings and what passes for a morals clause deals with sexual harassment in the workplace.

Which brings me to David Letterman's recent disclosure that he has had sex with female subordinates who worked on his show. Much of the coverage has mentioned that this was before his marriage to his live-in girlfriend of more than a decade with whom he fathered a child. Some wish to draw a moral distinction between fornication and adultery. It is something like the line Whoopi Goldberg tried to draw on "The View" between rape and what she called "rape rape" while discussing director Roman Polanski's 1977 sexual assault of a 13-year-old girl. Hey, if Woody Allen (a signer of the petition for going easy on Polanski) can marry his adopted daughter when he was the lover of Mia Farrow, who is to say any line exists between anything?

On his show, Letterman admitted only to "creepy" behavior. Does this make him a "creep"? Not in our modern cultural view of morality. To admit to being a creep would exact a moral judgment and suggest a line exists that divides the creep from the non-creep.

CBS president Leslie Moonves is unlikely to be helpful in the Letterman affair(s) as rumor has it that while he was still married he famously "dated" a subordinate by the name of Julie Chen, who coincidentally was promoted to co-host of the network's morning show. I'm sure Ms. Chen got her job based on merit and no other considerations entered into her selection.

More disturbing than Letterman's behavior and acknowledgement of sex with subordinates (it wasn't a confession in the religious sense of the word because an honest confession usually leads to repentance and we are a long way from that with these cultural polluters) was the reaction from the studio audience. When Letterman mentioned that a man -- allegedly "48 Hours" producer Robert Halderman -- had tried to extort $2 million from him in return for the man's silence, Letterman transformed himself into a victim and the audience laughed and applauded. He said he wanted to protect his wife, the women with whom he had had sex, himself and his job. I can hear my late father now: "If you want to protect yourself, you should not engage in behavior that puts you at risk. That would be the best protection" Dad was so old-fashioned and so right.

Stephanie Birkitt, who was described by The New York Times as "Letterman's long-time personal assistant," is one of the women alleged to have had a sexual relationship with Letterman. She has appeared in numerous skits on the show. Apparently the casting couch lives at CBS.

A Washington Times headline revealed the shallowness in our moral water table: "Letterman's TV Affairs Admission Called Adept PR Move." It's all about public relations and survival these days, not contrition and repentance.

The legalities of all this have yet to be worked out, but as Halderman's lawyer said last week, what is known is not all that will be known. That will keep the tabloids busy as they seek to talk to the women involved. But this should be a reminder to the rest of us that television has become a rude and unwelcome guest in our homes. If my children were young, I would get rid of it. It has little that is worth watching and a lot that is harmful to what remains of the rapidly unraveling moral fiber of America. In fact, a strong case can be made that so much of what is on TV is aiding and abetting the unraveling.