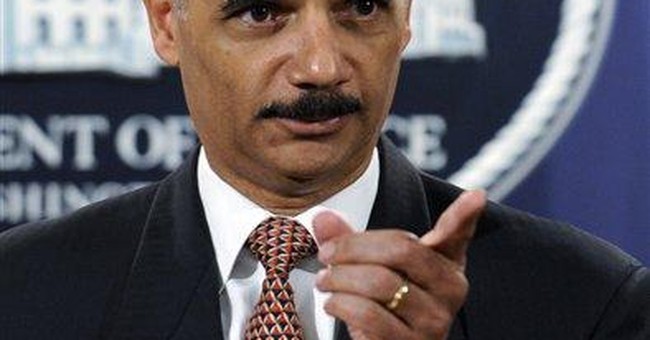 After pledging during last year's presidential campaign, and as recently as the spring, not to re-visit the past, the Obama administration, in the person of Attorney General Eric Holder, has named a special prosecutor to go after CIA interrogators who pried information from terrorist suspects, preventing more deadly assaults on the country.

Before the hard Left assumed power, anyone engaged in protecting America by interrupting terrorist plans might have expected to receive a commendation. Now they could face jail time. And somewhere in a cave in Pakistan, Obama bin Laden rejoices. By any objective standard, releasing terrorists from prison and prosecuting their interrogators is nuts. How can these actions fulfill the president's oath to defend the country?

The Justice Department wants to apply new interrogation rules to methods that were used and approved during the Bush administration. This is like lowering the highway speed limit to 55 mph and then giving speeding tickets to people who drove 65 mph when the higher speed was legal.

What is to be gained from going after CIA interrogators who thought they were operating within the law and defending the country? Doesn't the white wine and Brie set understand that a terrorist won't discriminate between people with jelly for a backbone and those with backbones of steel? Do they really think they will escape death by being nice to killers who use our laws against us in order to replace those laws with theirs? Islamic terrorists repeatedly say this is their goal and they have demonstrated it enough by their actions that only a fool would doubt them.

In Malaysia, a Muslim woman awaits a public caning because she was seen drinking beer. "Honor killings," genital mutilation and other forms of abuse against women occur throughout the Islamic world. Hate is taught to young children in some Palestinian textbooks and on TV. Fundamentalist imams envision the downfall of the West and its subordination to Islam by force. Only a deranged person would believe that giving terrorists a cup of tea and the right to manipulate our legal system so they can kill again will turn them into pacifists who will study war no more.

Former Vice President Dick Cheney continues to courageously say what needs to be said about this ongoing war. In a statement to The Weekly Standard, Cheney said, "The documents released Monday clearly demonstrate that the individuals subjected to Enhanced Interrogation Techniques provided the bulk of intelligence we gained about al-Qaida." That we gained critical information by firing a gun in an adjacent interrogation room, or by displaying a chainsaw, or even choking a detainee thought to possess critical information ought to be a lesser concern than the number of lives saved because of information these men gave up.

Sen. Joe Lieberman (I-CT), one of the few liberals who comprehends what we face, issued a statement: "I respectfully regret the decision by Attorney General Holder and fear our country will come to regret it too because an open-ended criminal investigation of past CIA activity, which has already been condemned and prohibited, will have a chilling effect on the men and women agents of our intelligence community whose uninhibited bravery and skill we depend on every day to protect our homeland from the next terrorist attack."

Lieberman added, "Career prosecutors in the Justice Department have previously reviewed allegations of abuse and concluded that prosecution was not warranted, with the exception of a CIA contractor who has already been convicted." One can only conclude that politics has trumped common sense at Justice.

CIA Director Leon Panetta courageously defended his agency against allegations by Speaker Nancy Pelosi that the CIA had lied to her. In protecting the CIA, Panetta fulfilled his oath of office. Now that he and his agency have been emasculated, Panetta ought to resign in protest. Many would consider resignation an even greater act of courage and the ultimate expression of patriotism.