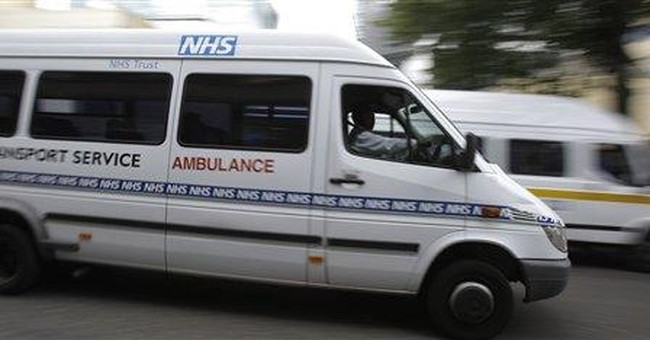 PORTADOWN, NORTHERN IRELAND -- For the past month I have watched British media report and comment on the American health care uproar. American cable networks are also available here. The back-and-forth reporting and commentary resembles a replay of the War of 1812, this time with verbal salvos. Conservative American politicians and commentators fire at the British NHS system and the British fire back, sometimes on the same program, repeating the Democrats' mantra of how 47 million Americans are "uninsured" and how medical treatment in the United States depends on how much patients, or their insurance companies, will pay. Here, they say, health care is "free," thanks to taxpayers, a minority of which (i.e. the successful) bears ever-greater amounts of the burden.

A conservative British politician trashes the NHS on Fox News and the BBC carries an excerpt, along with a defense of the NHS by other British politicians, including Tory leader -- and prime minister in waiting -- David Cameron. In an apparent effort to outflank the critically ill Labour Party, Cameron promises to strengthen the NHS.

The British media are conflicted. They patriotically defend the NHS, while simultaneously acknowledging its serious shortcomings. One example: A recent Daily Mail editorial praised the NHS for its free care and universal availability, but then added, "Our survival rates for breast, prostate, ovarian and lung cancers are among the worst in Europe, despite huge additional expenditures." Free is nice, but best is better.

Beyond the headlines are some disturbing trends within the NHS that ought to serve as a warning to Americans, should they wish to abandon, rather than improve, our current system for treating the sick.

The story reported that socialized medicine has created a shortage of doctors, nurses and other clinical staff. As of March 31, a survey found a 5.2 percent vacancy rate in these critical fields, compared to a 3.6 percent vacancy rate a year earlier. According to the Times, "Qualified nurses and midwives are retiring at a greater rate than newly trained staff can enter the professions." A poll conducted by the Royal College of Nurses found that among 8,600 young people, aged 7 to 17, "only 1 in 20 considered nursing to be an attractive career."

Anthony Halperin, a Trustee of the Patients Association, said: "Nursing staff see that there are higher rewards in the private sector while doctors and dentists no longer see medicine as a career for life, or are having their hours cut back by European legislation. All of this has negative outcomes for patients." A man attending a town meeting in America and who opposes the Democrats' reform plan said on Fox News, (and replayed on BBC): "Have you seen British teeth?"

Anyone wishing to revise America's medical system and model it after Britain and Canada ought to thoroughly examine how these health care systems function before plunging into the same pool. A reasonable conclusion is that these systems require long waits and treatments (if you can get them) that are inferior to the U.S., based on government "guidelines" that frequently approve care only if the patient is deemed "worthy of the investment."

As a symbol, Adolf Hitler has been overused, but the philosophy behind the horrors he unleashed can be found in the beliefs of some of those who would use the power of the state to determine who gets help and who doesn't.

The 1933 Sterilization Law was one of Hitler's first acts after taking power. Called "The Law for the Prevention of Genetically Diseased Offspring," it required compulsory sterilizations for those deemed by the state to be "racially unsound," including people with disabilities.

In a posting on the Huntington's Disease Website, Phil Hardt, who along with his wife visited the Holocaust Museum in Washington to study the Third Reich's view of medicine and the sick, reached this conclusion: "Perhaps when you reduce a human being to nothing more than an 'element,' they somehow become easier to abuse and later kill."

As with a journey, so it is with inhumanity: both begin with a single step.