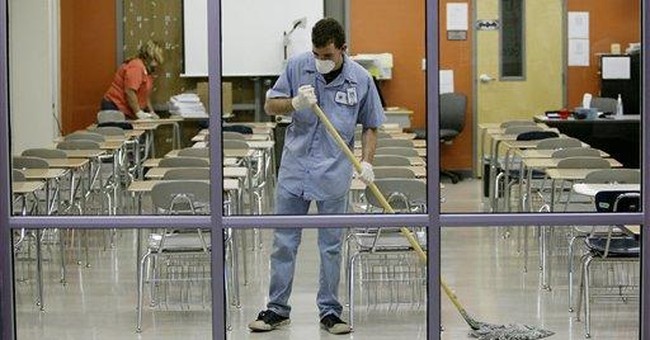 Some people have certain presumptions -- for example, that government is better suited to handling problems than individuals or private entities. And then there are the accompanying assumptions that government, for those who have faith in its supposedly superior capabilities, will always produce the desired outcome.

Nowhere has the failure of presumptions to produce results from assumptions been more evident than in public education. In an essay for the American Enterprise Institute for Public Policy Research (AEI), excerpted from their book "Schoolhouses, Courthouses, and Statehouses: Solving the Funding-Achievement Puzzle in America's Public Schools," Eric A. Hanushek and Alfred A. Lindseth write that many, including the courts, have blindly accepted the assumption that more money will improve student performance. "Almost no one has seriously examined the empirical evidence to determine its validity." They have.

The authors look at four states -- Wyoming, Kentucky, New Jersey and Massachusetts -- where courts ordered the legislatures to appropriate more money for public schools on the presumption that increased spending would improve performance. Their conclusion: court-ordered funding does not necessarily improve test scores and African-Americans, despite the increased spending, are even worse off.

The authors write that, "Even when judging the effectiveness of their own previously ordered remedies, courts rarely examine the remedy's effect on student achievement." They cite the Wyoming Supreme Court's dramatic 1995 ruling that the state's education funding system was unconstitutional, ordering the legislature to spend whatever it took to make education in the state the "best." "Despite these unprecedented increases in school funding," write Hanushek and Lindseth, "the achievement of Wyoming's students has largely failed to keep up with the nation or even with its much lower-funded, although demographically similar, neighboring states." The court has paid little attention to the outcome of its spending order, apparently because it just assumed it would work.

In Kentucky, the 1989 Rose decision resulted in a court order for certain structural changes and increased funding. The structural changes were implemented, but they produced no improvements in classrooms. The National Assessment of Educational Progress (NAEP) scores, sometimes referred to as the nation's report card, showed little or no progress in Kentucky public schools. Of special significance was the impact on black students, who comprise 11 percent of the state's public school enrollment. The authors write that black students in Kentucky "have fallen even further behind the nation" during the court-ordered remedy.

New Jersey has been wrestling with its education system and court orders to fix it since 1970. There are more than 600 school districts in the state. Thirty-one are known as "Abbott districts," named after the court case that resulted in $1.5 billion in additional education spending (per pupil spending in New Jersey exceeded $20,000 last year). The Abbott districts contain about half the black and Hispanic students in the state. What's the result of all this new spending? The authors write, "The picture we find is a mixed one, with little evidence that the state's black students have progressed much, if at all, relative to black students nationwide." They do note that Hispanic students have made "significant progress," but they don't see a direct connection between spending and achievement.

In Massachusetts, education spending has increase from $3 billion to $10 billion over the last decade because of a court order, but it has been accompanied by major structural changes that include "a rigorous regimen of academic standards, graduation exams, and accountability."

The argument for school choice is strengthened when one reads the data and conclusions by Hanushek and Lindseth. African-American parents, especially, should protest in the streets because too many of their children are being denied their right to a good education. Politicians who care more about campaign contributions from the education lobbyists than they do about children should be thrown out of office and replaced with people who put children first and allow them and their parents to choose better schools for a better future.