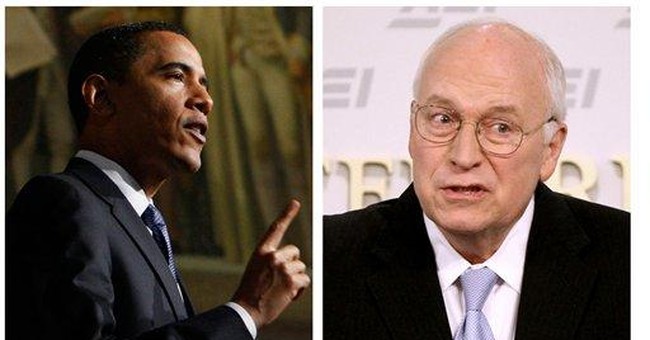 Wouldn't it be nice if things were simple instead of complicated; if hailing our Founding Fathers and the documents they wrote were sufficient to persuade people who do not share their views about life, liberty and religious tolerance to lay down their arms and worship at the altar of our Constitution in the temple of the National Archives?

Alas, life is not simple. Those Founders spoke to Americans who would embrace their ideals, not terrorists who would destroy them. And isn't it peculiar that President Obama, who is about to nominate his first justice to the Supreme Court, invokes an inerrant view of the Constitution when it comes to "torture," but takes a less than textual view of that grand document when it comes to a social and political agenda he wishes to advance?

The president's address Thursday, while reflecting his usual eloquence, was also full of contradictions. He appeals to the Constitution, but during the campaign he said it is flawed and so must be interpreted by judges. In his speech, Mr. Obama suggested that by not resorting to enhanced interrogation techniques, America is strengthened and kept safe. Perhaps he might explain why such an approach did not keep us safe on 9/11, or protect us from previous terrorist attacks before Gitmo.

The president said enemies have surrendered to American troops in battle because they knew they would be treated well as prisoners. How about they feared being killed?

In perhaps the weakest argument of his speech, the president said about the Bush administration's reaction to 9/11, "Unfortunately, faced with an uncertain threat, our government made a series of hasty decisions ... based on fear rather than foresight." What would he have done after the murder of 3,000 Americans? He didn't say and he can't say, because in order to have proper foresight you have to have the correct hindsight, and hindsight extends beyond the Bush administration back to the presidency of Bill Clinton, who dithered when he could have taken out Osama bin Laden, thus setting up the disaster on 9/11.

The president criticized the "politicization of these issues," but he had no problem doing precisely that during the campaign. So which is it? Politics is OK when you're trying to beat the other side, but not OK when the other side tries to beat you?

The president rejects fear, but fear is good if it keeps you on edge, which we clearly weren't leading up to 9/11. Rational fear helps defend us from danger. It's why most of us don't handle poisonous snakes, or drive 100 miles per hour, or fly in severe weather. Our fear of terrorism is not irrational. Terrorism is a clear and present danger, as the arrest of the alleged synagogue bomb plotters in New York attests.

President Obama wants to put at least some of the Guantanamo detainees in maximum-security prisons in the U.S. Assuming an ACLU lawyer doesn't win their release, these suspects might convert others in prison to their cause in order to recruit them for jihad should they be let out. Some of those New York terror suspects were converted to Islam and radicalized while in prison.

A more mature and sobering vision was offered by former Vice President Dick Cheney, who has emerged as the Republican Party's missing backbone.

In a well-crafted and powerful rebuke to President Obama's call for treating terrorists as criminals rather than enemy combatants, Cheney said, "Throughout the '90s, America had responded to these (terrorist) attacks, if at all, on an ad hoc basis ... with everything handled after the fact -- crime scene, arrests, indictments, convictions, prison sentences, case closed. ... 9/11 made necessary a shift of policy, aimed at a clear strategic threat -- what the Congress called 'an unusual and extraordinary threat to the national security and foreign policy of the United States.' From that moment forward, instead of merely preparing to round up the suspects and count up the victims after the next attack, we were determined to prevent attacks in the first place."

It worked. History will show this approach protected our "values" against those who would destroy them. If there is another attack, President Obama won't be able to blame it on the shortsightedness of the Bush-Cheney administration.