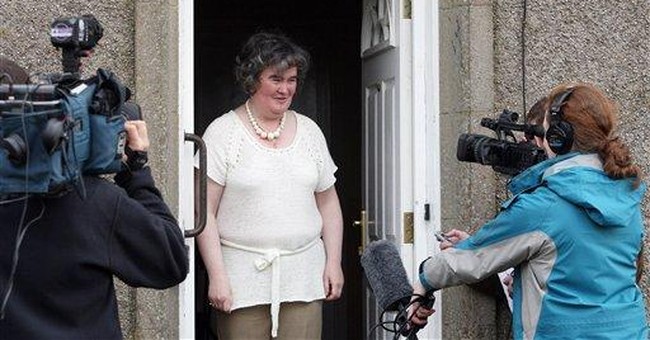 For two days I contemplated the phenomenon that is Susan Boyle. As nearly everyone must know by now, Boyle is the Scottish singer who blew away the judges, the audience -- and by the millions of YouTube hits -- much of the world with her performance on the "Britain's Got Talent" television program.

Susan Boyle's performance is not the entire story, however. She's had her magnificent voice since she was a young girl. We are the story because of our reaction to her.

Watch the seven-minute YouTube video to get the full impact. One sees two young men assisting Susan backstage. We quickly size her up: a nearly 48-year-old woman with graying hair, a dress that looks as if it might have been purchased at the British equivalent of Wal-Mart hugging a body that even she described as "like a garage." Frumpy is the word that first comes to mind.

As she walks on stage, the condescension is as thick as a London fog. The judges are Piers Morgan, a former tabloid newspaper editor, the irritating Simon Cowell, the show's creator and also the co-host on America's talent reality show "American Idol," and Amanda Holden, a beautiful, blonde English actress. The message they send with their facial expressions and body language is reinforced by cutaway shots of the audience: What are you doing here? Shouldn't you be mopping the stage instead of singing on it?

Cowell asks her to share her dream. Boyle says she wants to be like the English musical theater legend Elaine Paige. Cowell seems to struggle to hide his disdain, as if to say, "yes, and I'd like to be prime minister." He asks her what she intends to sing and she announces, "I Dreamed a Dream" from "Les Miserables." One of the judges is heard to mutter; "a difficult song."

The music begins and not 12 bars elapse before a stunned audience erupts in applause. All those hypocrites who thought nothing good could come from this dowdy woman because our narcissistic culture has taught us that the only thing that matters is beauty, not depth of character, suddenly want to embrace what seconds ago they had instinctively rejected.

More music, more words and the audience is on its feet cheering. Slowly, the gorgeous Amanda Holden rises to applaud and the contrast could not be starker. Two women are standing, one the incarnation of all we define as beautiful, the other exuding a depth of beauty that Holden and the entire audience wishes it possessed. The faux beauty is paying tribute to the reality.

People are crying, not from the external beauty represented by Holden, but because of the internal beauty projected by Susan Boyle.

I have worked in television most of my professional life. I see many women before they have their hair and makeup done. Most are good looking enough; some are just average. But when they emerge from their makeovers, they have been transformed into something they are not. Reality was before. They are now someone's fantasy.

Even though we know where physical beauty ultimately leads -- to wrinkles and sometimes to despair -- we still worship it. The 18th-century English poet Thomas Gray got to the heart of it when he wrote:

"The boast of heraldry, the pomp of pow'r,
And all that beauty, all that wealth e'er gave.
Awaits alike the inevitable hour:
The paths of glory lead but to the grave."

In an interview with a British newspaper, Susan Boyle said, "Modern society is too quick to judge people on their appearances. There is not much you can do about it; it is the way they think; it is the way they are. But maybe this could teach them a lesson, or set an example."

Let's hope it does both.