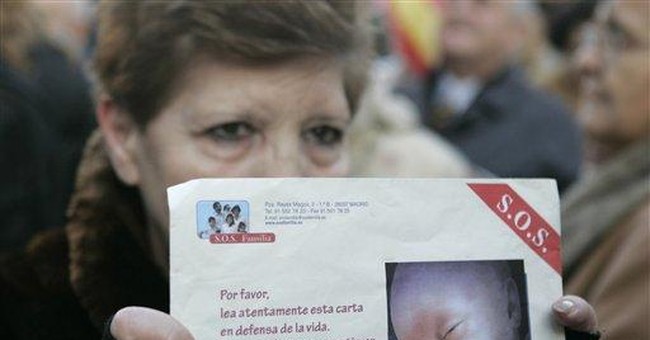 For social liberals, what is it about abortion that makes some of them consider it a sacrificial rite through which only the killing of an unborn child can truly liberate a woman from the clutches of paternalism?

A rule approved in the waning days of the Bush administration established broad protections for health-care workers whose religious faith, conscience or moral misgivings forbid them from participating in an abortion. Last Friday, the Department of Health and Human Services, which is still without a confirmed secretary, announced its intention to rescind the regulation. There will be a 30-day period of public comment before the rule is overturned. Here is mine.

No politician can be found who admits to favoring abortion. To acknowledge moral misgivings means that you are at least acknowledging that the beating heart and brain waves extinguished during an abortion are of greater significance than, say, the removal of an appendix or a tumor. Infected appendices can burst, killing the individual. A tumor can grow, become malignant and cause death. A growing unborn child can be born and contribute not only to the betterment of the country, but if you're utilitarian about it, increase the tax base. Abortion kills a potential taxpayer, which ought to override every other consideration for liberal politicians who are constantly looking for new sources of revenue.

Why do social liberals say they want to make abortion "safe, legal and rare," but then spend all their time on the first two and none on the third? It is relatively simple to reduce the number of abortions, even while keeping them "safe" and "legal." Show the abortion-minded woman a sonogram of the fetus she is about to destroy. A 2005 survey by Care Net, a network of about 1,000 antiabortion pregnancy centers in the United States and Canada, based in Sterling, Va., found that "72 percent of women who were initially 'strong leaning' toward abortion decided to carry their pregnancies to term after seeing a sonogram." That isn't depriving a woman of her "choice." It is providing more information so that her choice will be fully informed.

Carried to its logical conclusion, repealing the "conscience rule" would allow hospitals to require pro-life doctors and nurses to participate in abortions. The Catholic Church teaches that elective abortion is a mortal sin, so the government is considering a requirement that would place a Catholic in the position of risking excommunication and the eternal damnation of his or her soul. Evangelical Christians regard abortion as equally offensive. Where is the separation of church and state when you really need it?

Arguments in favor of overriding the conscience rule include concerns that it might apply to people dispensing contraceptives at the pharmacy. Others say it could be used to prevent rape victims from receiving pregnancy protection assistance at a hospital. These are arguments we've heard before. Even if pro-lifers grant these exceptions, it isn't enough for the abortion lobby, which uses extreme situations to keep the door open to abortion on demand for any and all reasons.

In my view, there are far fewer people who oppose contraception than oppose abortion. Besides, one prevents conception and the other kills something that is living and, if left to be born, will breathe. Any employee at a pharmacy who doesn't want to sell contraceptives can ask another store employee to do it. You can't bring an aborted baby back to life, even if a woman later regrets the decision, which many do.

To repeal the conscience rule is an affront to ever American who believes government ought to be under God, not play God. It is an insult to religious faith and to pro-lifers of no religious faith who see the danger of rendering one category of human life as having less value than another. We should be aware of where this can lead. If you are a resident in an assisted-living center, you might consider putting an extra lock on the door, because you are next. By the time our consciences have been reprogrammed, the bureaucrat who decides you've outlived your usefulness will have forgotten how to feel guilty about anything.