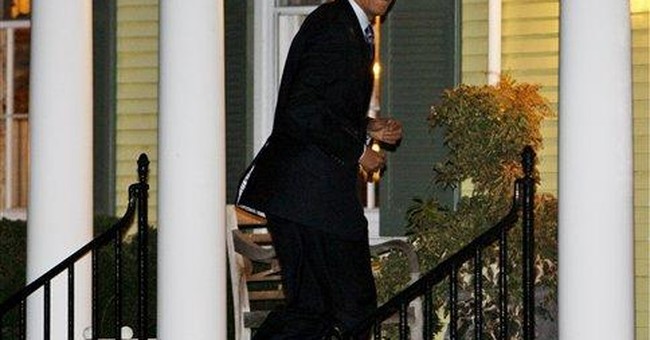 Welcome to Washington, soon to be "Mr. President." I know you've been here before for a short time as senator, but this is different. This is The Big Time, the world stage and you are the leading man.

You campaigned on change and won the election. That was the easy part. Every new administration comes to town thinking it will be better than the one before it, more honest, more ethical, more competent. But people and events have a way of frustrating the loftiest goals. All of your good intentions notwithstanding, no one person can change a city built on a swamp, a city that has taken on many of a swamp's characteristics.

Even conservatives like me want you to succeed, so long as you don't pursue a strictly left-wing agenda. Would you like to disarm the social conservatives? Instead of signing an executive order that strikes down what few restrictions remain on abortion, start with your declared intention to make abortion rare. Ask for legislation that requires pregnant, abortion-minded women to receive full disclosure, including sonograms, so that their choice will be fully informed. Elevate the visibility of the pregnancy help centers around the country that quietly and without charge assist women before and after childbirth. They even help women who have chosen to have abortions. You will create a lot of goodwill among those who otherwise might oppose you.

Here's another suggestion: focus less on ideology and more on how people can become independent of government. For too long, your party has emphasized misery, failure and government dependency instead of success, fulfillment and self-sufficiency. By spotlighting people who move from dependence to independence, you model and encourage achievement.

Take the lead in inspiring African-American youth to stay in school, study hard, delay sex until marriage and build a family. You are a great example of what right decision-making can produce. You can help change the attitude among too many African-American teens that studying and getting good grades is "acting white." Set your people free and your place in history will be assured no matter what else you do.

Don't make the mistake Republicans made when they ran all three branches of government. Make Republicans feel like fellow Americans with a different plan for reaching similar goals. No one wants poorly performing schools, more poverty and a weak national defense. If we can agree on the problems, we can then discuss the best way to solve them. Include Republicans in your decision-making and at least occasionally embrace some of their ideas. Disarming your opponents is less bloody and can be more productive than crushing them. Most people are tired of the partisan bickering. If you produce results through a common ground approach, as you pledged to do during the campaign, you will engender goodwill. Goodwill is the capital every president must have to get anything done.

I realize this next suggestion is self-serving. Invite conservative columnists and opinion leaders in to see you. Explain to them what you are doing and consider their ideas for doing it better (or not at all). This, too, is likely to generate goodwill among some who could quickly be an impediment to your success. We conservatives don't want to be saying "no" all the time and that personality of yours might just win some of us over; if not on all of your policies, then at least on some. Fortunately, you made a good start here by recently meeting with conservative columnists who have been critical of you in the past. More of this is needed.

You may think you are all-powerful (or others may tell you that) but don't let "the smell of the white paint," as a friend who worked in the Nixon administration called it, intoxicate you. Humility is a strong quality that contrasts with the arrogance and hubris so often associated with the city in which you will temporarily reside. Work hard on thinking of others as better than yourself. In doing so, you might humble some of them, which would be a miracle in itself.

Good luck, God bless and I hope you succeed in the things with which conservatives can agree. And on those things we cannot agree, I at least promise to be more than a naysayer and suggest how they might be done better.