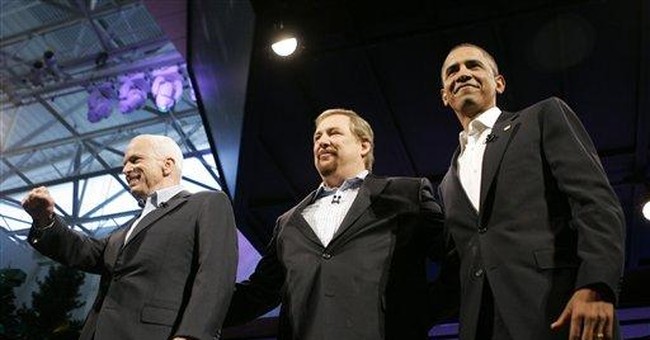 The "civil forum" featuring presidential candidates Barack Obama and John McCain may not have been as exciting as Michael Phelps winning his eighth Olympic gold medal, but it was civil and it was a forum from which emerged useful information.

McCain had the most to gain. Judging by the applause, he won the night among evangelical voters. He told them what they wanted to hear: He would be a pro-life president with "pro-life policies." He believes the unborn have human rights "from the moment of conception," that marriage is between a man and a woman and that the California Supreme Court was wrong to strike down the state's existing statutes, limiting marriage to opposite sex couples. "I'm a federalist," he said, but added that if the federal courts start forcing one state to accept rulings on same-sex "marriage" from another state, he would then favor a constitutional amendment to define marriage as between opposite sex couples. McCain said he would allow "contracts" between same-sex couples.

McCain also gave the strongest answer on the theological concept of evil. He said his approach to evil would be to "defeat it." Speaking of Osama bin Laden, to get him he said, "I would follow him to the gates of hell," which might be easier than following him to the mountains of Pakistan.

Asked to define "rich," McCain offered a mini-sermon, noting that "some of the rich" are "the most unhappy," adding that he doesn't want to take from the rich; rather he wants "everybody to get rich." He opposes "redistribution" - a code word for higher taxes - proposes a $7,000 tax credit for every child and health care choice. In contrast to Obama, McCain said that spending is the reason for the deficit, not taxes that are too low and he ridiculed a $3 million earmark to study the DNA of bears to underscore his point.

Obama did himself some good among evangelicals by giving them the bottom line for their faith: "I believe that Jesus Christ died for my sins and I am redeemed through him. That is a source of strength and sustenance on a daily basis."

Obama and others on the evangelical left see government, not individuals or the church, as the instrument by which the commands of Jesus are implemented. In such a doctrinal interpretation, government serves as a kind of "lesser God," intruding on believers and their commission to do good works, as a means of sharing the gospel message, and concentrating not on the message, but on the implementation of the work itself, which only helps in this life, not the next.

Obama's faith tells him nothing about human life (knowing when a baby acquires human rights is "above my pay grade," he said).

The National Right to Life Committee (NRLC) has discovered "new documents" that it says prove that Obama "has for the past four years blatantly misrepresented his actions on the Illinois Born-Alive Infant Protection bill."

According to NRLC, as chairman of the Illinois state Senate committee, Obama "voted down a bill to protect live-born survivors of abortion - even after the panel had amended the bill to contain verbatim language, copied from a federal bill passed by Congress without objection in 2002, explicitly foreclosing any impact on abortion." Obama claims he voted against the bill because it was designed to undermine Roe vs. Wade, but NRLC says specific language was included in the measure to alleviate his concerns. It says he supported that language, but then led committee Democrats in voting against the amended bill and it was defeated by a 6-4 vote. (See NRLC for the full analysis.)

Obama links his faith to the role of government, frequently sighting the "inasmuch as you've done it unto the least of these, you have also done it unto me" statement by Jesus as justification for his government-as-redeemer philosophy. When politicians use faith as a tool of public policy, they risk encouraging too much faith in government and too little faith in God.

Rick Warren was right when he told CBN reporter David Brody, "I happen to be in the kingdom of God. My kingdom is not of this world. And sometimes when people don't understand that they want you to be on their political bandwagon."

Warren seems to have learned from the mistakes of those who preceded him and dabbled in the earthly kingdom, often to their and that other kingdom's detriment. The Saddleback Forum was a useful contribution to one kingdom and a reminder to evangelical Christians of the source and strength of their faith and hope. It shouldn't be in politicians.