Byron York
|
Posted: Dec 29, 2021 12:01 AM
Share   Tweet
The opinions expressed by columnists are their own and do not necessarily represent the views of Townhall.com. 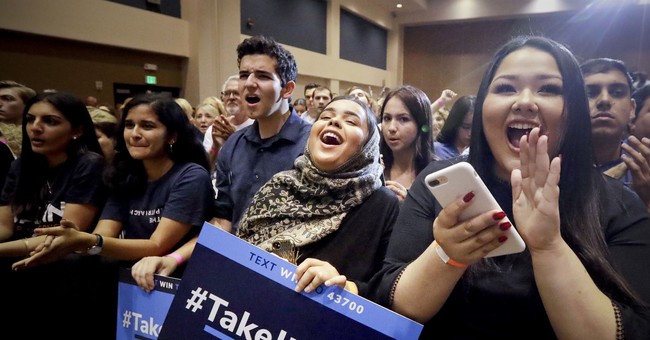 The Democratic Party's problem with Hispanic voters is worse than leaders think, according to a new assessment by the highly regarded strategist Ruy Teixeira. That conclusion is particularly important because Teixeira wrote the influential 2002 book "The Coming Democratic Majority," which convinced many Democrats that a growing Hispanic population -- one that heavily supported Democrats -- was the key to permanent Democratic dominance of American politics.

Now, with Hispanic voters abandoning the Democratic Party in droves, it's all falling apart. "The seriousness of this problem tends to be underestimated in Democratic circles for a couple of reasons," Teixeira writes in a recent Substack article. "(1) They don't realize how big the shift is; and (2) they don't realize how thoroughly it undermines the most influential Democratic theory of the case for building their coalition."

Teixeira's last point is an understatement. The idea of a permanent Democratic majority is based totally on Hispanic voters. No other group is growing at the rate the Hispanic population is growing. When Democrats looked forward to the day when a nonwhite-majority America elected Democrat after Democrat, they were basing it on the growth in the number of Hispanic Americans, coupled with the assumption that those voters would loyally support Democrats. If that doesn't happen, there's no permanent Democratic majority.

And for now, at least, it doesn't seem to be working out. Instead, Teixeira cites several measures of Hispanic voters increasingly supporting Republicans. A new Wall Street Journal poll found them split evenly on the question of whether to support the GOP or Democrats in the 2022 congressional elections. That's a big change from an imposing Democratic advantage in previous races. The poll also showed the Hispanic vote virtually tied in a hypothetical 2024 Joe Biden-Donald Trump rematch -- after supporting Biden by more than 25 points in 2020.

There's more. In Texas, which Teixeira calls "perhaps the Democrats' most prized target" for winning with growing Hispanic support, "Biden's ratings among Hispanics have been dreadful." A recent Dallas Morning News poll found Biden's support at 35% approval and 54% disapproval among Texas Hispanics. Those voters particularly disapprove of Biden's handling of the crisis at the U.S.-Mexico border. Meanwhile, in the Virginia governor's race, Teixeira notes with some astonishment, "Democrat Terry McAuliffe actually lost the Latino vote." That took some work, but McAuliffe accomplished it.

Teixeira also points out that Hispanic voters moved in large numbers to Trump between 2016 and 2020. And not just in Florida and Texas -- the shift was also seen in Wisconsin, Nevada, Pennsylvania, Arizona and Georgia.

Hispanic voters are particularly cool toward Biden. "Working Class Joe" does not seem to connect with those voters, who are largely working class. Hispanic voters without a college degree "[gave] Trump a remarkable 41% of their vote in 2020," Teixeira notes. That is especially important because about 80% of the Hispanic vote nationwide could be classified as working class.

But it's not just Biden. Latino voters appear to be increasingly turned off by the Democratic Party itself, and particularly by its progressive leaders. That was certainly true in 2020, the year of Black Lives Matter for much of the party. The Democrats' increasing focus on racial issues left Hispanic voters unmoved. And that leads to what is perhaps Teixeira's most important point:

"It is hard to avoid the conclusion that Democrats have seriously erred by lumping Hispanics in with 'people of color' and assuming they embraced the activism around racial issues that dominated so much of the political scene in 2020, particularly in the summer," Teixiera writes. "This was a flawed assumption. The reality of the Hispanic population is that they are, broadly speaking, an overwhelmingly working class, economically progressive, socially moderate constituency that cares above all about jobs, the economy and health care."

Hispanic voters did not want to defund the police. They did not want to slash police budgets or reduce the number of officers. They didn't want to reduce the role of law enforcement in keeping the peace. And they didn't like the idea of reparations. They were, in other words, entirely out of touch with the Summer of BLM.

Finally, many Hispanic voters are repelled by the anti-Americanism of some progressives. Hispanics in a recent survey "said they would rather be a citizen of the United States than any other country in the world and by 35 points said they were proud of the way American democracy works," Teixeira notes. Such opinions, he adds, "contrasted starkly with the negative views of progressive activists."

In other words, Hispanic voters seem to be out of sync with the most powerful trends in today's Democratic Party. Will it last? Who knows? But at this moment, the Democrats' problem presents a huge opportunity for Republicans.

This content originally appeared on the Washington Examiner at washingtonexaminer.com/opinion/byron-yorks-daily-memo-democrats-lose-hispanic-voters-lots-of-them.