Byron York
|
Posted: Sep 20, 2018 12:01 AM
Share   Tweet
The opinions expressed by columnists are their own and do not necessarily represent the views of Townhall.com. 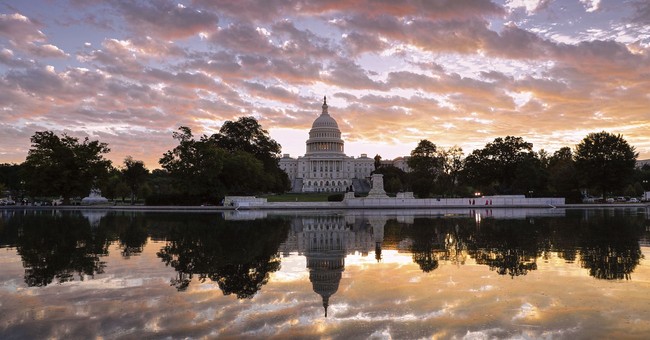 Republicans know what the midterm election polls say. They hear the talk about a blue wave. They're aware of historical party-in-power midterm losses in the House. But they still see something else, seven weeks out from Election Day.

"It's like the hurricane cone," said one GOP strategist. "It's out in the middle of the Atlantic Ocean, and the range of where it can land is huge, because there are a lot of things that are yet to happen that you have to understand."

Notice the strategist did not predict Republicans will keep control of the House. Rather, he and others are keeping hope alive in a political environment that, like the hurricane's path and intensity, can change quickly.

"If the election were today, the Democrats would take back the House," said another Republican strategist. "But we're not far off. Things aren't great, but I don't think we're that far away."

Of most concern right now, the second strategist said, are those districts with the highest percentages of college graduates. "There are two worlds in polling right now," he explained. "The great divide is education -- more than gender. A college degree seems to be the big dividing line."

That has always been a divide, but never as much as since the rise of President Trump. The education split that developed during the election endures. In a Quinnipiac poll last month, the president's job approval among college-educated white voters was 41 percent approval, with 55 percent disapproval. Among whites without a college degree, it was precisely the opposite: 55 percent approval, with 41 percent disapproval.

"Trump is a real weight in the most educated, affluent, suburban districts," the second strategist said.

He pointed to Colorado's 2nd congressional district, represented for the last decade by Republican Rep. Mike Coffman. Coffman managed to win in 2016, when Hillary Clinton carried the district by nine points. But now, a recent New York Times poll showed Democratic challenger Jason Crow pulling away from Coffman, with an 11-point lead. Among the poll's respondents, 57 percent had either a bachelor's or graduate degree.

There are other Republicans in similar fixes in similar districts, like Rep. Erik Paulsen in Minnesota's 3rd. Paulsen has won five terms in a district that Clinton won by nine points in 2016. Now, the Times poll showed Paulsen down by nine points to Democrat Dean Phillips. Among the poll's respondents, 58 percent had either a bachelor's or graduate degree.

The good news for Republicans is that there are not that many such districts currently in the GOP column. And in other places, Republicans believe they are picking up ground.

In the last few days, the Congressional Leadership Fund, a big pro-Republican Super PAC, touted success in turning around the race in Kentucky's 6th district, where just a couple of months ago Democratic challenger Amy McGrath had all the buzz and momentum over embattled GOP incumbent Andy Barr. In early June, McGrath led Barr 51 percent to 38 percent in one poll. Now, in the new New York Times survey, Barr has pulled ever-so-slightly ahead, 47 percent to 46 percent.

GOP strategists attribute the change to old-fashioned campaigning -- door-knocking and negative advertising -- focused on the basics. "Along with the Barr campaign, Congressional Leadership Fund has spent its time and money defining Amy McGrath as an out-of-touch Pelosi liberal," CLF chief Corry Bliss wrote recently, "and the data shows it is working."

Highlighting the prospect of a Nancy Pelosi speakership has always been an effective strategy for Republicans, and it is still working.

What is most frustrating to Republicans now can be summed up in a few numbers: 3.9 percent unemployment; 4.2 percent growth; 26,154 Dow Jones average. How can a party take those healthy, happy economic numbers into an election and have such a good chance of losing?

To some in the party, the problem is all the noise and disruption that comes from the Trump White House. GOP candidates are still recovering from the storms over the president's Helsinki visit and illegal immigrant family separation policy. Now, many Republicans are hoping, perhaps against hope, for a smoother, quieter time between now and the election.

"We've got two more jobs reports and one GDP report coming out before the election," said the first strategist, "and we're wondering whether Republicans can get back to focusing on jobs and the economy as opposed to every other issue."

"If we could have three or four weeks of just calmer waters, we could organically start to do better," said the second. "People could say the economy is good and Pelosi is bad."

Of course, for Republicans, even as the president's style alienates some voters, the results of his policies -- lower taxes, deregulation, economic growth, conservative judges and a strengthening military -- are the foundation of their campaigns today. Trump, as always, is a double-edged sword.

Democrats have plenty of problems of their own, among them a continuing progressive-establishment split and the fact that they have no discernible agenda beyond opposing Trump. All of which makes this a very complicated race, further complicated by the fact that a large number of voters have a negative view of both parties. That's one of the factors that made the 2016 presidential race so volatile, and now, in a different race with different players, it's happening again.