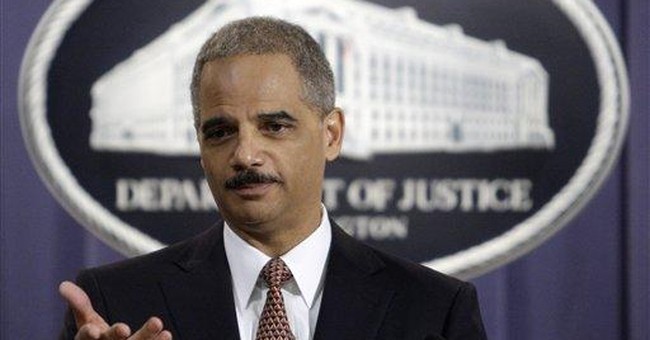 It seems like a simple question. Who made the decision to charge Umar Farouk Abdulmutallab, the accused terrorist arrested for trying to blow up a Northwest Airlines jet on Christmas Day, as an everyday criminal, as opposed to an enemy combatant?

After all, Abdulmutallab was trained by al-Qaida, equipped with an al-Qaida-made bomb, and dispatched by al-Qaida to bring down the airliner and its 278 passengers. Even though the Obama administration has mostly abandoned the term "war on terror," the president himself has said clearly that the United States is at war with al-Qaida. So who decided to treat Abdulmutallab as a civilian, read him the Miranda warning, and provide him with a government-paid lawyer -- giving him the right to remain silent and denying the United States potentially valuable intelligence that might have been gained by a military-style interrogation?

So how did it happen? We know from a new Associated Press report that after Abdulmutallab was taken into custody, he was questioned for all of 50 minutes -- yes, less than one hour -- before going into surgery for treatment of the burns he suffered trying to blow up the plane. While Abdulmutallab was in surgery, the Justice Department in Washington made the decision to read Abdulmutallab the Miranda warning and provide him with a court-appointed lawyer.

And that was that. "Isn't it a fact, that after Miranda was given ... the individual stopped talking?" Republican Sen. Jeff Sessions asked Mueller.

"He did," Mueller answered. But Mueller declined to say who made the decision to grant Abdulmutallab the right to remain silent.

The issue is enormously important because Abdulmutallab, newly trained by al-Qaida in the terrorist group's latest hot spot, Yemen, likely knows things that would be useful to American anti-terrorism investigators. He's not some grizzled old terrorist who has been sitting in Guantanamo Bay since 2003 and doesn't have any new intelligence. He's fresh material. Yet he is protected by U.S. criminal law from having to answer questions.

Why? Republicans on the Judiciary Committee increasingly believe there is only one person who can answer: Attorney General Eric Holder.

It was Holder who made the decision to try 9/11 mastermind Khalid Sheikh Mohammed in a criminal trial in New York. It is Holder who has expressed his desire to grant full American constitutional rights to foreign terrorists. It is Holder who is leading the administration's sputtering effort to move some Guantanamo inmates to the United States. And it is Holder who is apparently cutting other parts of the government out of crucial terrorism decisions such as the treatment of Abdulmutallab.

"These days, all roads lead to the attorney general," says one well-placed Republican source in the Senate. "They seem to have aggregated quite a bit of power inside Main Justice." The problem is, the Holder Justice Department appears to be handling terrorism issues from a defense-attorney perspective, and doing so without the input of the government's other terrorism-fighting agencies.

That was the message of that rather stunning testimony from Blair, Leiter, Napolitano and Mueller, all of whom were out of the loop on the Adbulmutallab decision. Their accounts left a number of Republican senators shaken; as the GOP lawmakers see it, the decision to read Abdulmutallab Miranda rights -- after just 50 minutes of questioning -- was a dreadful mistake, one that could have serious consequences down the line. There should be some accountability.

So on Jan. 21, all seven Republicans on the Judiciary Committee sent a letter to Holder asking for a full explanation: Who made the decision and why, and whether the administration now has "a protocol or policy in place for handling al-Qaida terrorists captured in the United States."

Republicans were troubled by the decision even before Senate testimony showed that major administration figures knew nothing about it. Now the lawmakers want to know what happened, and they believe the only person who can tell them is Holder.