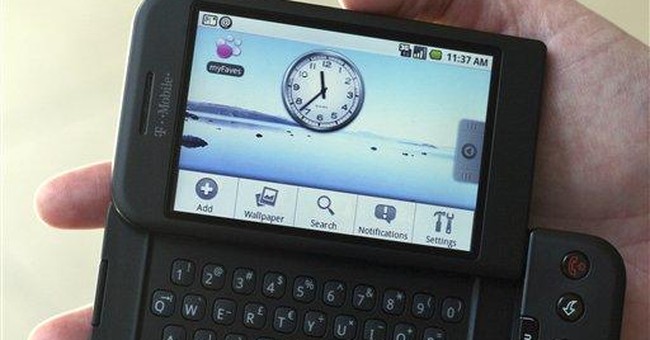 Near the end of 2008, I appeared on a radio show when my friend Mark Isler substituted for the vacationing Hugh Hewitt. At one point, Mark asked the listening audience to call in and discuss those things they would miss the most in the coming year.

One of the first callers said that, thanks to a new law, he’d miss being able to text-message while driving here in California. Even though the caller was a young sprout, a mere 21 years old, I was amazed that he regarded this as an enormous sacrifice.

My initial response was to ask him why he felt it was imperative to be in constant communication 24 hours a day. It is not simply because I am more than three times his age that I find such a compulsion bordering on the psychotic. Aside from the obvious danger inherent in text-messaging while driving, when does a person have time to think, to be introspective, if he’s constantly on a cell phone or twiddling messages with his thumbs? I confess I have a cell phone, but it’s at my wife’s insistence, and she’s the only person who has the number. What’s more, I generally forget to take it with me. Which is another way of saying I tend to remember to leave it at home.

Years ago, the French philosopher Rene Descartes said, “I think, therefore I am.” Today, I’m afraid an American would be likelier to remark “I text, there4 I be.”

Which brings us to another modern phenomenon. Namely, Oprah Winfrey. Although I suppose it verges on heresy, I am not a fan of hers. As a writer, I suppose I should cut her some slack because she encourages her viewers to read. On the other hand, any adult who depends on Ms. Winfrey to determine their reading matter is the same sort of goofy person who’s going to rely on her judgment when it comes to voting in a presidential election.

Recently, Ms. Winfrey was embarrassed because a Holocaust memoir she had highly recommended, Herman Rosenblat’s “Angel at the Fence,” turned out to contain fictional elements. This is the second time she’s fallen into this trap. The first time was when she swooned over James Frey’s “A Million Little Pieces,” which purported to tell the life Frey lived as an alcoholic/drug addict/petty criminal before pulling himself out of the gutter. On that occasion, she had Frey back on her show in order to verbally draw-and-quarter him in front of her cheering audience. I figured if he hadn’t been an authentic lost soul when he wrote his book, he probably was after being so brutally pilloried.

In order to spare Queen Oprah future embarrassment, I’ll give her a tip. Fiction is nearly always better-written and usually much closer to the truth than that which is passed off as factual. So, instead of shilling on behalf of current heart-tuggers, it might behoove her to encourage the ladies to read the classics. Charles Dickens, Mark Twain, Victor Hugo, Booth Tarkington and Raymond Chandler, have all survived the test of time -- and, best of all, they’re all dead and can’t possibly embarrass her excellency.

I would point out that it’s only logical that, most of the time, fiction is better written than non-fiction because whereas professional writers write fiction, it is generally researchers and academics who churn out the other stuff.

So, instead of worrying whether little Roma Radzicki actually came to the Nazi concentration camp where little Herman Rosenblat was confined 70 years ago and handed him apples through the barbed wire fence, I think Oprah’s time would be better spent if she were ever outraged by the obvious bias of the MSM and the partisan lies it spews out on a daily basis, lies masquerading as objective news reporting.