Come to the Aid of the Party 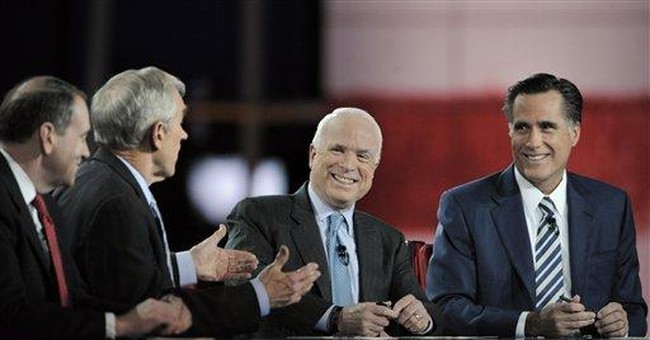 If he had thrown his hat in the ring, my first choice for president would have been Newt Gingrich, probably the smartest guy in politics. I still hope that whoever gets elected this November will make Gingrich his secretary of state.

But we don’t live in a perfect world so, several months ago, I came out in favor of Rudy Giuliani. My main reason for doing so was that I trusted him to deal in a serious way with our Islamic enemies. Unlike, say, George Bush, who couldn’t say enough nice things about Muhammad’s religion, Rudy didn’t seem to think he had to pussyfoot around the subject for fear of being politically incorrect. In other words, Giuliani made it clear that he was running to become president of the United States, and not the mayor of Dearborn, Michigan. Perhaps he made it too clear.

I would have voted for him if he hadn’t bowed out, but that doesn’t mean that if Romney, Huckabee or even John McCain, gets the nomination, I plan to stay home and sulk on election day.

I happen to think that people who support Clinton or Obama have a screw loose, but they strike me as being far more rational than my fellow Republicans who are threatening to boycott the election if their favorite candidate doesn’t head up the ticket. I can’t tell you how many people have written to me insisting that they’re sick and tired of voting for the lesser of two evils. I understand that they’re trying to convey their frustration, but I can’t help sniffing the undeniable stench of self-righteousness.

It’s as if they’re unaware that politicians are human beings, and not God. They’re people just like the rest of us, I point out, comprised in part of ambition, greed, arrogance and vanity, not to mention, on occasion, integrity, courage and even altruism. Let’s face the facts, ladies and gentlemen -- even those politicians we agree with also want to ride in well-guarded limousines and fly on Air Force One, have everybody stand up when they enter a room, be able to give tongue-lashings to senators and congressmen, have “Hail to the Chief” as their theme song, and never ever have to press one for English.

If there’s a single thread that runs through the e-mails I receive from peevish Republicans, it’s that none of the current candidates possess the conservative purity of Ronald Reagan. One could almost get the idea that Dutch was betrayed by Pontius Pilate and crucified on Calvary. But that wasn’t exactly the case. The fact of the matter is that Governor Reagan gave Governor Jerry Brown a run for his money -- or should I say our money? -- when it came to raising taxes here in California. But, in spite of the additional revenue, he was responsible in large part for the streets of our cities being turned into public latrines by the unwashed, the unwanted and the insane when, to save a few bucks, he oversaw the closing of California’s mental hospitals. He also signed the nation’s most liberal abortion bill. Although he had a change of heart a scant six months later, one never hears him condemned for flip-flopping on the issue.

And, lest we forget, as president, he opened the floodgates to illegal aliens by signing an amnesty bill in the mid-80s, and, for good measure, appointed Anthony Kennedy and Sandra Day O’Connor to the Supreme Court, neither of whom was the answer to a conservative’s prayer. Frankly, as admirable as Reagan was in so many ways, I suspect that if he were seeking the GOP nomination this year, he’d be dismissed as a RINO by many of the party’s zealots.

None of this is intended to tarnish the man’s image, but simply to point out that the common perception of his conservative purity sometimes owed more to his charm and his ability as an actor to read a script and deliver a funny line, than to his politics.

What truly confounds me are those cuckoos who would prefer to see such Socialists as Hillary Clinton or Barack Obama win the election than to sully themselves by voting for a Republican who was only their second or third or even fourth choice. To them I say, before proving that you place your own ego gratification above what’s best for America, keep in mind that most of the Supreme Court justices are in their 70s or even, in the case of John Paul Stewart, fast approaching 90. Do you really want one of those two Democrats stacking the Court for the foreseeable future? Presidents come and go, but justices go on seemingly forever. Kennedy and Scalia have been on the bench since Reagan put them there. Stevens, for heaven’s sake, was appointed during the Ice Age.

These are the nine men and women who have the final word on everything from abortion to eminent domain, and you’re going to let some left-winger make the call because you don’t like Mitt Romney as much as you do John McCain, or Mike Huckabee as much as Fred Thompson, Rudy Giuliani, Ron Paul or Duncan Hunter? If so, you really ought to be ashamed of yourselves.

The way I see it, before writing off any of the Republican frontrunners, you owe it to your country to just suit up, play your heart out, and win this one for the Gipper.