MARCOBOT: We Don’t Need Another ‘Siri’ for President!

Bryan Crabtree
|
Posted: Feb 09, 2016 12:01 AM
Share   Tweet
The opinions expressed by columnists are their own and do not necessarily represent the views of Townhall.com. 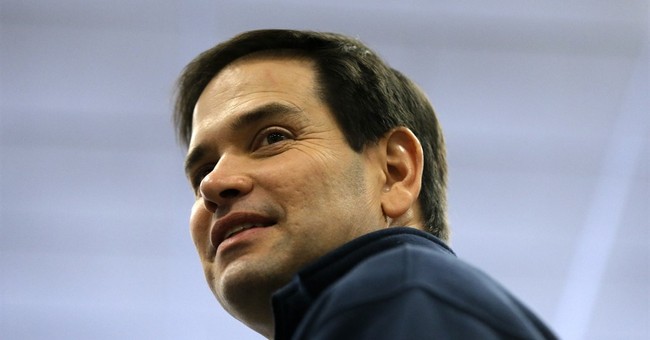 Marco Rubio during the New Hampshire primary debate on Saturday night had a ‘President Obama’ moment. It sent chills up my spine.

During a very heated exchange with New Jersey Gov. Chris Christie that lasted for several minutes, he continued to deflect from the questions and launched into a tirade about the damage caused by President Obama. By the third time he had done it, I felt embarrassed for him. By the fourth, I lost a lot of respect for him.

Aside from the fact that this was obviously a canned speech given to him by some of his handlers it also appeared to be a vain attempt to connect with voters by speaking ill of Obama. It was disingenuous.

It’s obvious that Marco Rubio is an intelligent person. But the danger in his intelligence (for voters) is that it makes it very easy to ‘fake it until he make’s it’ by memorizing talking points and 20-second speeches on topics that will be raised in the debate. This means we never get to see the real person. Instead we get ‘Marcobot.’ In the debate, it appeared as if someone has programmed him with artificial intelligence in a series of eloquent and powerful phrases that fit almost any policy matter. Re: He sounded like Siri answering a question about driving-directions. In case you don’t have an iPhone: Sometimes Siri just keeps repeating the same phrase or question because she doesn’t understand the question and has no clue as to the answer.

Remember, in 2008, President Obama spoke eloquently and with a great deal of passion. It was so powerful he was able to win the votes of many conservatives. He sounded like a Washington outsider who no matter his policies was going to bring big change to a broken system. Fast-forward to 2016, and we find a president that stutters, can barely find the words to describe his positions and has taken the country in the wrong direction. The word that Obama uses most often now is “uh.” This is what happens when every moment can’t be scripted by a handler.

There is no doubt Marco Rubio’s rhetoric is eloquent, uplifting and powerful. But, so were Barack Obama’s speeches, circa 2008.

I’m not criticizing Marco Rubio’s qualities as a person. I’m simply stating that he’s not experienced enough in leadership to be given the Nation’s top-job.

Comparing Sen. Marco Rubio of Florida and then Sen. Barack Obama of Illinois, we find some shocking similarity. In the lead up for their presidential runs, Sen. Rubio and Sen. Obama missed hundreds of Senate roll calls and votes. While Obama’s missed votes are near 25%, Marco Rubio’s is still more than double the average senator.

Both Obama and Rubio have a similar Senate record as well. Both of them had a lot of great ideas but had very little legislative success. Leading up to their presidential run, both had almost no private sector experience. During the debate, Gov. Chris Christie pointed out that Marco Rubio had never been in a position of leadership where he was the sole person to be held accountable for his decisions and actions. The same could have been said about Obama when he was running for president in 2008. It's one thing to be an eloquent speaker and to have great ideas but as the President of the United States you have to be able to execute.

Even if you're (for some reason) a fan of Obama’s health care reform, the execution of Obamacare has been a complete disaster. From the website launch, insurance companies failing to increasing premiums and catastrophic cancellations, its clear that it was an idea without execution in mind. Great ideas are just that: ideas. A strong leader not only has to have vision and ideas but they have to be able to implement and execute effectively. Obama’s presidency has been horrific due to his inexperience, detachment from reality and lack of empathy for the effect of his ideas.

What we've learned is that we've elected an ‘eloquent’ president who has the wrong ideas, no leadership skills, an incredibly divisive demeanor and has no practical executive experience. He’s one man who fooled an entire country of people through creatively written talking points, eloquent speeches and an uplifting message. It’s likely he didn’t write much of what he said that got him elected. It’s clear he is a fraud as a result of the disasters he has since created.

Watching Saturday night’s debate caused my heart to skip a beat realizing that I was likely staring at a Republican version of Obama. A President Marco Rubio might offer policies that are more in line with my conservative views. He might even be more open-minded and shy away from Obama’s style of near-psychotic behavior. But, it became blatantly obvious that the message coming from Marco Rubio was a message coming from someone else we haven’t met. It’s the same as asking Siri a question on my iPhone. It’s a real voice, but someone else wrote the answer.

I have always said that I would be surprised if Marco Rubio isn't the President of the United States someday. And, with experience, I still think he will be. But we must recognize that we made the same judgment mistake with the first-term Democratic Senator from Illinois in 2008. This is a job that requires ‘a lot of miles’ and a ton of experience. Rubio is just not there yet.

Marco Rubio may seem to be the most electable of the Republican candidates against Hillary Clinton or Bernie Sanders. But ‘Marcobot’ will not be able to stand up against a vicious Democrat trying to claw their way into the Oval Office. He will need more than talking points and canned speeches or we conservatives will get slaughtered (again) in the election.