Dump Trump or Not?

Bryan Crabtree
|
Posted: Jan 23, 2016 12:01 AM
Share   Tweet
The opinions expressed by columnists are their own and do not necessarily represent the views of Townhall.com. 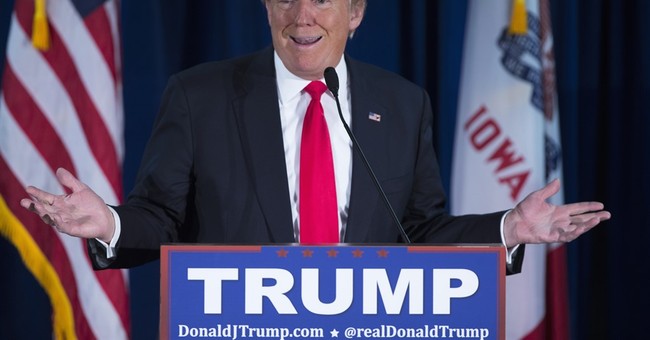 Is Donald Trump really a Democrat who should scare conservatives? Several conservative media pundits have joined together to assert he is not a real conservative. It’s called “Against Trump.” In National Review, they wrote “he is a philosophically unmoored political opportunist who would trash the broad conservative ideological consensus within the GOP.”

What does that even mean? It sounds to me like a purist and detached assessment of the Country for which they live and work. Conservatives want a winner who can make this country function. The problem with conservative pundits (such as the “Against Trump” contributors) is that they are stuck way too deep in the wonky think-tanks of Washington D.C. circles. They aren’t in the streets talking to the people and having conversations with them like I do. They are staying safe in their industry echo-chambers.

The citizens who support Trump want someone with a proven record of success. And, for all the dismissiveness of how Donald Trump inherited money from his father, had casinos go bankrupt in the 1990s and attempted to buy some widows’ beach home for four times what it was worth, he’s got a host of other attributes that are clearly positive and conservative. I have a great deal of respect for most of the writers of “Against Trump” but when it comes to credibility, I look at resumes and track-record. Trump has attained (after subtracting his inheritance) more wealth than all them combined. His adult-children seem like wonderful people and his employees seem loyal and rarely have negative comments about his company.

I’m not interested in judging someone’s heart, their faith or their failures. I’m more interested in determining if this person, Trump, can use all of this experience (good and bad) to lead our Nation properly. This article is not an endorsement. It’s a thought process.

The average American understands that a credit card company doesn’t look at the fact you had a bankruptcy 25 years ago in order to approve your new credit card. Instead, they look at your record since to determine your likely future behavior. This simple principle seems to escape the pundits as they loath him as a cheater in 25-year-old corporate-bankruptcies. He paid back his personal debts; the banks moved on. They should too. No story here.

I’ll comment on Editor Rich Lowry and writers Brent Bozell, Glenn Beck and Dana Loesch who contributed to “Against Trump.”

On Thursday, Rich Lowry told Fox News’ Megyn Kelly what defines a conservative. “If you truly are a conservative, you believe in ideas and principles…it’s not just attitudes.; It’s limited Government, it’s the constitution, It’s liberty.” For the sake of argument, let’s assume Donald Trump is none of these things. Then, who is? Is it Lindsey Graham comparing Ted Cruz and Donald Trump to the choice between getting shot in the head or poisoned? Why are they not outraged as his radical rhetoric? How about Mitch McConnnell, the “conservative” leader in the Senate? McConnell just presided over a large omnibus spending bill that expands government and funds President Obama’s leftist agenda. He just announced he’s ready to give President Obama war powers which could give expanded executive-action authority. Rich: Thanks, but no thanks. We’ve tried your ilk.

Activist Brent Bozell told Fox News “President Trump would be a terrible face of America to the World….He’s an absolute narcissist.” It’s putting the world’s opinion over ours that has made President Obama such a failure. And, how does Bozell know he’s a narcissist? Is he Trump’s psychologist? I realize he’s trying to make a point. However, my point is that Bozell labeling Trump a narcissist is no different than Trump bashing Ted Cruz.

Talk radio host Dana Loesch, said that she is “at shot show right now…this is the first time I’ve ever known Donald Trump to make an appearance at any kind of gun show,” saying he was in favor of the assault weapons ban a few years ago. Her assertion? His conversion to conservatism isn’t authentic. This seems to suggest that citizens, in order to qualify for political office, must have been historically running their lives as a political campaign showing up just to be seen. I own several guns, thousands of bullets and am a big supporter of the second amendment. I’ve never been to a gun show in my life. I buy my guns at the gun store; I must be out of the club! Regretfully, not only is such an argument hollow, it’s deceptive.

Trump presents a fearful loss of access, credibility, influence and prestige for many media pundits. For some, like Glenn Beck, I believe they are confused. The confusion lies in understanding the industry culture of someone like Trump. Working in the media and running a real estate company are entirely different (I’ve done both for 21 years). Real Estate is brash, volatile and high-stakes on every level. In real estate, you’re either competent or not. You have good judgment or you don’t. It’s quickly obvious. In media and politics, you can be deceptive, incompetent, even crooked for a long time and never get caught if you’re also clever. What we are seeing in these media outbursts such as “Against Trump” is the maturing of a group of previously-thought seasoned experts who have been duped by people acting as their friends but using them for power.

They’ve never seen a guy like Trump actually succeed by saying, “I don’t care about you; I don’t need you.” The media is less deceptive than ignorant.

Historically, the pathway to political success in Washington has been to emotionally bribe the media, until now. Donald Trump decided to manipulate the media and it has left many with a serious bruising of ego and credibility.