No, You Cannot Debate Global Warming

Bruce Bialosky
|
Posted: Oct 14, 2018 12:01 AM
Share   Tweet
The opinions expressed by columnists are their own and do not necessarily represent the views of Townhall.com. 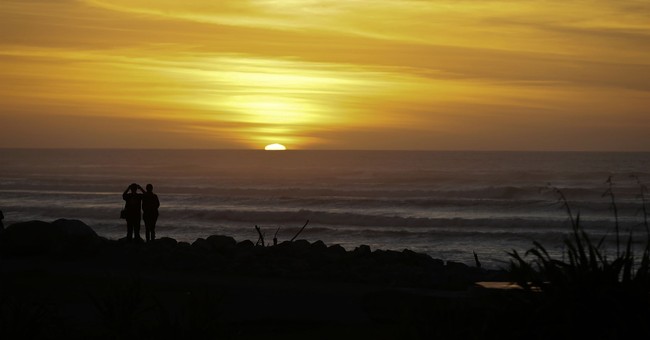 There are multiple subjects that currently divide us.  If you choose to challenge the conventional wisdom on one of these topics, in any regard, that the Earth is warming (now referred to as “Climate Change”) you are accused of being a heretic.  Some of us believe there is no such thing as “settled science” thus we are always open to arguments from both sides as to what has occurred in the evolving knowledge.  Recently, I was presented with a completely different argument.

Anytime I have written on this I have always referred to climatologists as my source of information.  These are qualified experts who not only have a long history of scholarly study in the area, but have the scientific ability to analyze the models presented that predict future world weather. That is why my recent reading of a column really changed my typical way of looking at the issue.

Receiving email from a vast array of sources with a broad political bent keeps me informed of news that a large segment of the population thinks is important.  One of the best collections of columns and articles that hits my email box every day comes from Real Clear Politics (RCP).  RCP has an excellent distribution of columns that often have a unique perspective or a topic that is fresh to me.  I spotted a column that piqued my interest from a person I had never heard of and a publication that was unfamiliar to me.  The title was “How Do You Tell If the Earth’s Climate System is Warming?" by Francis Menton.

The crux of the column is that whether the Earth is warming or cooling is based on the time period you are comparing.  The Earth over various different periods warmed or cooled and thus Menton’s thesis is that you could argue, and often people do, warming or cooling using inherently the same facts, but just a different base period.  The thesis is something I found fascinating because of two reasons. First, I had never read what Menton was purporting anywhere else and; second, I have seen conflicting arguments as to whether we are currently in a warming or cooling trend.

Finding that the column was different and somewhat even-handed, I ventured into the orbit of sending it to someone who is a gung-ho global warming person to elicit their opinion.  The response “A blogger debunking a vast conspiracy of scientists. I'll pass.”  I replied, “It is always this guy does not qualify, that guy does not qualify. but is he wrong?”  To which I got this “This is just more tribalism. The Republicans will automatically disagree with anything that is being supported by the Democrats. Also the vast majority of energy money is flowing to the Republicans. What Republican would ever be on the other side of an issue that the Koch brothers were lavishing money on. Scientific evidence and facts could not be more irrelevant to this debate. “I answered, “Thank you, but is he wrong? I picked up the column off of a daily summary from Real Clear Politics. They are truly even-handed; I did not know the guy’s background until after I read the column.  Why would you assume he is a Republican?  He is a NY lawyer.”

I decided to contact Francis Menton.  Menton is a semi-retired trial lawyer.  He formed his blog, Manhattan Contrarian, six years ago.  He told me he not only was a Harvard Law graduate, but his undergraduate degree was from Yale in math.  Though he is not a climatologist, this is one smart guy who understands what he reads. He said though he is a little rusty on his math as things have changed since he graduated from Yale, someone with these credentials has the ability to analyze the information into which he delves. This is why he has written about 100 pieces on the environment.

He told me he got interested in the subject because the Climate Change argument was being used by supporters to transform the world economy.  He was studying the validity.  He found the temperature measurements really only go back to 1880 as noted by NOAA (National Oceanic and Atmospheric Administration).  He also cited that measurements at that time only covered 5% of the Earth and they were only accurate to 1 degree Fahrenheit.

This still gets down to what are the facts. Whether you buy into the argument that the planet is warming, and it is because of man-made conditions or whether you don’t, or you are somewhere in-between, you need to be open to further understanding and additional facts/observations. Just knee-jerk rejection of the arguments on either side because of where they come from or whether they don’t agree with your baseline thinking defies scientific thinking.

My biggest problem with the climate change crowd is their argument that this is “settled science.”   Science is never settled and arguing that is about the most unscientific thing ever stated.