Oh My God, He Won

Bruce Bialosky
|
Posted: Nov 13, 2016 12:01 AM
Share   Tweet
The opinions expressed by columnists are their own and do not necessarily represent the views of Townhall.com. 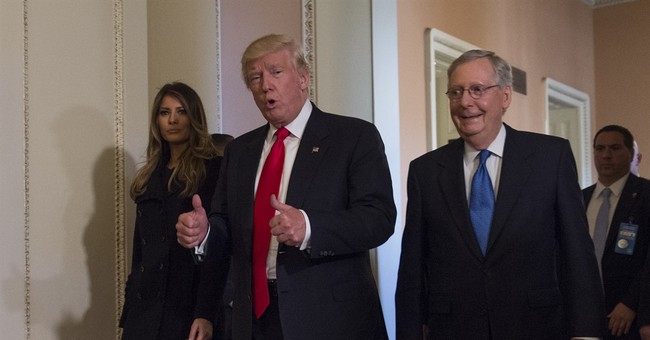 I awoke at 4 a.m. I looked at the ceiling and said to myself, “Did I really see that? Did he really win?”   Being on the Left Coast it was easy to stay up to see Donald Trump declared President-Elect of the United States.  Ms. Clinton had called and conceded and Pennsylvania had been universally declared as another brick gone from the blue wall.

I am writing this on an airplane en route out of the country on Wednesday morning. My wife and I are on a mini-vacation to serve two purposes.  First, to relax after this brutal election.  Second to incite all those insipid celebrities into actually keeping their promise that they would leave the country if Trump won.

Who would have thought that, within a scant week, the Cubs win a World Series and the Clintons are sent into political oblivion?  Too bad the people of Chicago cannot enjoy both.

Mrs. Clinton gave a first-class concession speech.  She needs to give one more to tell the people marching and whining about Trump winning to act with the same level class she displayed.  It is despairing to see the words used like disaster, hopeless, depressed, appalled, embarrassed by those who did not want Trump.  On the way to our resort a young couple from Boston was in the van with us.  Their reaction was they were scared.  My simple statement was “This is the United States of America; there is nothing to be scared about.”

There are so many thoughts that come to mind about this election that I can only list them in a stream of consciousness.

I am choking as I am writing this and you may choke as you read it, but Trump should put a stake into the heart of any investigation into the Clintons.  Sure they will get away with it again and walk away with their $100 million of graft, but for the sake of the country we need to move forward and make America great again.  Let these grifters fade into oblivion.  I thought about making a deal with them to shut down the Clinton Foundation, but no one will contribute to it anyway since they cannot buy influence.

The only recriminations should be against the pseudo-journalists outed in the emails from WikiLeaks that worked with the Clintons behind the scenes scheming to fix things against her primary opponents and Trump.  People like John Harwood should be fired.  At the very least, you should not endorse their behavior by watching or reading them.  The fact they are not fired is a statement of the quality of the operations for which they work.  This kind of behavior is destructive to the First Amendment and the freedom of the Press.

Donna Brazile should be drummed out of politics.  Is it any surprise she stated her conscience is clear after being caught providing debate questions from her employer (CNN) to the Clinton campaign?  As I have written before, they never have remorse because they believe the ends justify the means.  The Democrats should have the brains to get rid of her from the DNC.

The first things for the Trump Administration:

That should be a fine start.

Mr. Trump’s first choice for his administration has been a stellar one – Governor Mike Pence.  I had liked Pence before, but his performance during this campaign has made me proud to be a Republican.  He radiates competence.  Hopefully, Trump will 1) Use him to the fullest extent possible and 2) match his choice of him with picking his cabinet and top staff people.

Ms. Clinton lost the election for one overriding reason: She offered no vision for America.  Stronger Together was mush and it never got any better.

Did you notice for the most part where Clinton won a state she won with ridiculous percentages?  In D.C. Trump got 4% to her 93%.  In California he lost by 28%.  This is because the Left is all moving into little enclaves and huddling together.  Or, like in California, all the sane people (except my family and some friends) have been driven out.  This election the people voted even more taxes on themselves because having the highest tax rates and seeing businesses flee to Trump states does not bother them.  Or they are just oblivious to what is happening.

I cannot tell you how frequently I inform people living in their own universe in the tony areas of my state that California has the highest poverty rate in the nation.  They respond saying “since we have more people” and then I inform them that we have the highest percentage.  Then they say it is because of the high cost of living and I tell them that is adjusted for cost of living.  The Left ignores the high poverty rate when pitching California as a “progressive” paradise.

I will remind you if you are still wondering where Trump came from, it was Obama.  He put forth a radical agenda and a health care bill this country did not want and turned the country against the Democrats. He never got anyone elected other than himself and crippled the down ballot Democrats. The people saw what happens when the Left is in charge and rejected it before we continued down the slope that destroyed a once vibrant Venezuela.

Despite a media that constantly drumbeats for the Left and an educational system that brainwashes our children with their Leftist mumbo-jumbo, this is still a Republican country.  While friends from the both sides of the aisle would talk about Democrats being in charge it was only because of Obama.  Republicans controlled the House and Senate, the governorships and state legislatures.  Now they have the presidency.

For the first time since 1928 Republicans have The White House and both houses of Congress.  It is incumbent upon them to show that they can rule and do so responsibly.  Starting with the agenda above would be a grand way to go.

There will be a time soon for a woman to become president of our country.  Ms. Clinton just was not the one.

Pinch yourself, he really did win.