Bruce Bialosky
|
Posted: Sep 04, 2016 12:01 AM
Share   Tweet
The opinions expressed by columnists are their own and do not necessarily represent the views of Townhall.com. 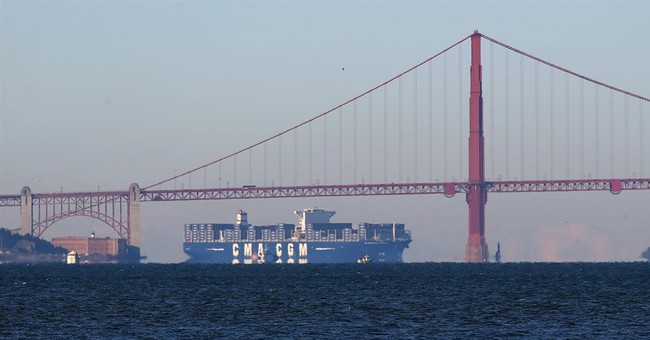 Just when you cannot envision the ignorance of the Left dipping any lower, they confound you with their dismal destruction via good intentions.  The latest comes from a poll stating despite the fact registered voters believe that people will lose their jobs and businesses will relocate out of state, they still overwhelmingly support the increase in minimum wage to $15 per hour in California.

The Democrat-owned legislature -- the ones that are not in jail or under indictment -- passed a bill that would gradually raise the minimum wage from $10 to $15 in 2022.  The poll says 64 percent of Californians support that.  That is while 66% of them believe that people will be laid off and 65 percent say that businesses will leave the state.  What would have been interesting is if the people who took the poll would have asked poll participants: Would you support the increase if your son or daughter were laid off?  Would you support it if your spouse’s business relocated to Utah, North Carolina or Texas?  It is always easy to say that policies are good when they are affecting the other person or their family.

Here is where matters get fascinating. Thankfully 89 percent percent believe the new wage level will raise the prices they are paying, even though I think they do not realize how much it will impact the costs of the goods they buy.  Still 11 percent said it would not impact prices.  I am not quite sure what level of education these people have.  I am undecided whether they are people who never graduated high school or ones with advanced college degrees. You have to be from another planet to not understand that raising the minimum wage 50 percent will severely impact the cost of goods.  That is without even thinking through how the increase will impact all wages up and down the workforce.

69 percent of the Californians believe the raise in minimum wage will give lower-income workers more money to spend.  That response is baffling.  If someone was making $10 and now is making $15, one would think they would have more money to spend.  Maybe secretively they realize that many people who still have jobs will be cut back on hours and certainly never see an hour of overtime; thus, they are no better off.  Maybe they were factoring in the fact that many workers will be replaced by Robby the Robot.

In another question, 58 percent of respondents stated they thought that employers will benefit from less employee turnover and higher customer satisfaction.  It is unclear on what basis this belief was derived.  It is understandable in certain circumstances employees who are better compensated will have greater job satisfaction, but that does not necessarily show up in customer satisfaction.

When debating the poll with someone I wrote this:

The severe economic hardship that is being done to millennials worldwide by work rules and to the low income workers by extreme wage increases that are going to put many lower-skilled employees permanently out of work is stupefying:

1. Teenagers will be restricted from getting job experience, stopping career growth and making them less hirable in the future.

2. Others will have no opportunity to have a job at all.

3. California already has the highest poverty rate in the nation.  This will only exacerbate that while the people who have high-paying jobs and/or work for the government live in ignorance of that.

What exact benefit do these people think is going to be derived from this?  That is what this poll does not really ask.  How about asking: Do you still endorse this policy knowing hundreds of thousands of people will be put out of work and never, ever be able to get a job?

I focus on restaurant workers because that is the business I know.  A gentleman who owns car washes in New York had a recent comment in the WSJ.  He said the new $15 wage would force him to charge $30 for a carwash.  That would either cause people to stop going to get their car washed or go from once a week to once a month.  He said he had no choice but to mechanize which would put 15 of 22 of his employees at one of his car washes out of work.

Where are those 15 people going to ever find another job?  Who is going to support them?

We all understand the failure of good intentions, but this is beyond that.  And I did not even get into how this is a plan to raise the wages of the unions and union members and they are willing to sacrifice non-union members.  Or let’s talk about inflation and bringing back the good old days of Jimmy Carter.

Though it is always difficult to structure a poll based on economic factors due to a severe lack of understanding of the issues by the public, if the poll asked the hard follow-up questions I suggested, the outcome would have been different and the Leftists in the Legislature would not have the comfort of feeling they have the public’s support.

The Left’s successes are always paved with destroyed lives from their unintended consequences.