Bruce Bialosky
|
Posted: Aug 14, 2016 12:01 AM
Share   Tweet
The opinions expressed by columnists are their own and do not necessarily represent the views of Townhall.com. 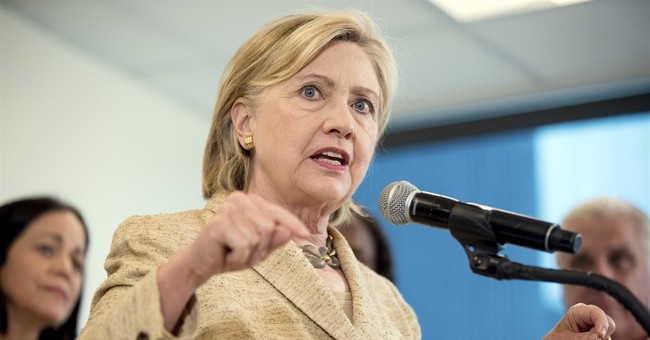 In Part 2 of the Clinton Economic Plan, we were reviewing the comments Hillary made on June 21st in a speech about the economy.  When we left off, Hillary was in complete denial of how Obamacare was driving costs of health insurance through the roof and she is now pimping “The public option” where the government takes the next step in nationalizing our health care system.  Let’s continue with the comments she made while deriding Donald Trump.

Clinton turned her commentary to Dodd-Frank, the only other bill of significance passed by Obama before he lost control of Congress and had to use executive orders to continue his attempt to centralize our economy in Washington.

Clinton stated “Reforms were designed to protect consumers and make sure Wall Street would not take the kinds of risk that crashed our economy last time.  Trump said he wants to wipe out the tough rules we put on big banks. He said they created a very bad situation.”  Translation:  She is in complete denial of the banking law put in place by her husband’s signature that spurred on the banks.  She is also in denial of the rules created by the federal government which loosened the qualifications for home loans at the center of the economic crisis.  Like any good politician she creates rules and when things go bad she points fingers at others.

What Trump is talking about with the tough rules put in place:

Next, Clinton took aim at the Consumer Financial Protection Bureau (CFPB).  CFPB was formed as part of Dodd-Frank.  Let me remind you that is the only agency or department of the federal government that has zero control by your elected officials.  The operating funds originally came from the Federal Reserve.

Clinton said: “Trump wants to repeal CFPB, the new consumer watchdog to protect families from unfair and deceptive business practices.  The new agency has secured billions of dollars for people who have been ripped off.”  Translation:  CFPB has taken in significant amounts of civil penalties to further fund their work and more government employees unsupervised by Congress.  I have researched the claims of CFPB which now reach over $10 billion of relief for consumers.  I reviewed the settlements and I am a little cynical.  I have accounts with some of these companies and never received a dime.  This seems very much like many of these lawsuits where the lawyers get huge fees and you get a letter in very small print stating if you can produce documents from seven years ago you can get $49.  To be accurate no one has produced a study showing the actual payouts from these settlements.  I’m just sayin’ …..

Then Hillary said: “Trump wants to rig the economy for Wall Street again.  That will not happen on my watch; I will veto any effort to weaken those reforms.”  Translation: Clinton has received more money from Wall Street for her campaign than all the other candidates put together.  Either those Wall Street people are fools or they think they are buying a candidate.

Switching subjects, Hillary told us she “has a plan to pay for all my proposals.”  Translation:  New taxes and lots of them.

That led to her talking about Trump’s comments on the national debt.  Clinton said “We pay our debts.”  Translation: Yes, we do.  We create new government bonds that are sold to pay off old government bonds.  The last time we actually paid down our debt was during her husband’s term when the Republicans downsized the federal government and we created a government surplus.  No plans for that happening under this Clinton.

Going after Trump, she said “Trump wants to just print more money to pay our debt down.”  Translation:  She could not be that ignorant that she never heard of QE1, QE2 and QE3 where the fed created money out of thin air and bought all those government bonds produced to pay for those huge Obama deficits.  What does she think we are doing now other than printing money?

Then she uncorked the best statement of all.  She said “We know what sound fiscal policy looks like and sure isn’t running up massive debt to pay for giveaways to the rich.” Translation:  Either she just completely tossed Obama and his team overboard or she is living in an alternative universe.  This is exactly what has happened during the Obama years and she is trying to point fingers at Trump?

Folks, all these comments in the last two columns came in less than 15 minutes of a speech which was aimed at making fun of Trump’s economic plans.  Your choice on November 8th.  The Wonk who wants to centralize more of the economy in Washington, continue the crony capitalism where your money is used to create winners and losers (the rest of us) and more taxes for you, or the other guy.

Julio Rosas
Why is the Government Using Black Tarps to Hide Illegal Immigrant Men at the Airport?
Katie Pavlich