The Real Insidiousness of the Supremes 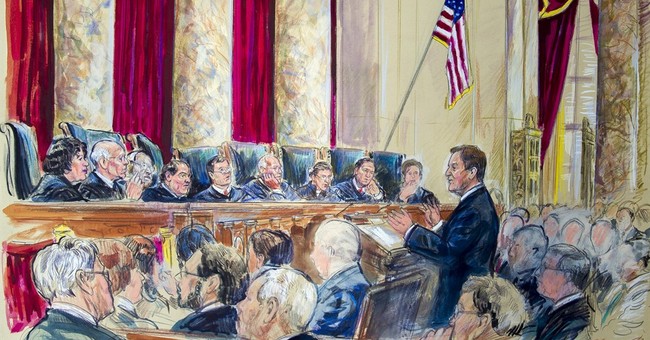 I in no way assert that I am an expert on the Supreme Court. I have read many books about Supremes such as Felix Frankfurter and John Jay, but that only gives me an inkling of insight. Listening to tapes of the testimony of the most famous cases gives me a little more knowledge. When the decisions came down last week, I relied on experts on both sides to give their thoughts and interpretations. Yet, they missed the key point of what occurred last week.

A few got close. You see there was a court case in 1984 called Chevron v. Natural Resources Defense Council. That case stated that when a congressional law is vague that the executive branch has the right to adopt its own interpretation of the law as long as it is “reasonable.” Of, course, reasonable is in the eye of the beholder. Since almost every congressional law is written in shades of gray, it allows mischievous or megalomaniacal people to take their own interpretation of whatever they want to achieve as a goal.

Thirty years later, that was consummated this week. Not a single prior administration has used executive fiat like the Obama administration. After the initial two years of determining the direction of our government through complete control of the legislature and the executive branch, Obama saw that he would no longer be able to push his goals through any means other than the ever-burgeoning bureaucracy. He then harnessed certain agencies like the National Labor Relations Board, the EPA, the FCC and the IRS to accomplish his goals.

Chief Justice Roberts validated this situation himself. He did it by one day stating that the executive branch could read into a law what it wanted to do (which is the actual ruling the court did not Chevron), but the next day vehemently arguing that that the government cannot usurp states’ rights by judicial fiat. He was saying faceless bureaucrats can make laws look like they want to, but the Supremes themselves don’t have the ability to do so. A simple observer of the scene could be deeply confused.

Here is where the catch comes in on this entire matter. The press, even the ones who cited the Chevron case, refer to the IRS as the operation that promulgated the interpretation of the Affordable Care Act (ACA, aka Obamacare). They were the ones who said the credits could be handed out by the federal exchange. Does anyone really believe that the organization that fights with the preferable ‘tooth and nail’ to stop reasonable people from deducting pedestrian expenses would fleetly determine that the federal exchange was qualified to pass out billions of dollars of subsidies? Supposedly, the same operation (IRS) that took over a decade to promulgate regulations regarding the law change of the sale of personal residences, the single most important transaction in most Americans lives, reacted in expeditious fashion to issue regulations regarding the ACA and the healthcare exchanges despite being so understaffed they cannot even answer their own phones.

Clearly what happened was that the White House saw that their gambit failed. They had determined that the best way to get states on board with the program was to have the handouts administered through the state exchanges. There was resistance in the Democratic caucus among the Blue Dog Democrats with handing over the health care system to the federal government thus the state exchanges were conceived. Their support was necessary as no Republicans would end up voting for it. And the only honest person in this entire process -- the architect of the plan -- Jonathan Gruber, told us all that the cabal that conceived the ACA never believed that a state would be foolish enough to restrict its residents from federal handouts. The states are always grubbing for federal money.

The shock sets in when the governments of state after state say “no way – not interested.” Valerie Jarrett or one of her lackeys called the IRS, which is supposed to be an independent agency, and tells them they have to save the ACA and come up with rules that say the federal exchange can hand out money also despite the clear intent otherwise. The IRS does the deed and sets off a firestorm. A lawsuit is filed and people start saying what a sin it would be to take away handouts to six million (who knows if that figure is correct) who are getting health insurance (but not health care) for the first (God knows how many were paying their own bills before the handouts) time.

We have now gone from the Nixon era where the country was flummoxed by an administration that would dare to intercede with independent agencies like the IRS to a new time. The Supreme Court has endorsed a presidential administration injecting their political will into the farthest reaches of Washington bureaucracy. Any president like Obama can say to the Congress and the American people “I will do as I wish and you cannot stop me.” Take me to court and if you get somewhere even Republican appointees will not overturn my actions. And we lie down and take it with a yawn.

In very short order with the recent rulings, we have seen the coalescing of control of our lives from the people and the states in which we live to bureaucrats and overtly politicalized presidential administrations. To some this may not be new, but it is final and irreversible. Obama has succeeded in his statement of fundamentally changing America. And we are all less free for it.