2010 Race of the Day: North Carolina Ain't So Blue 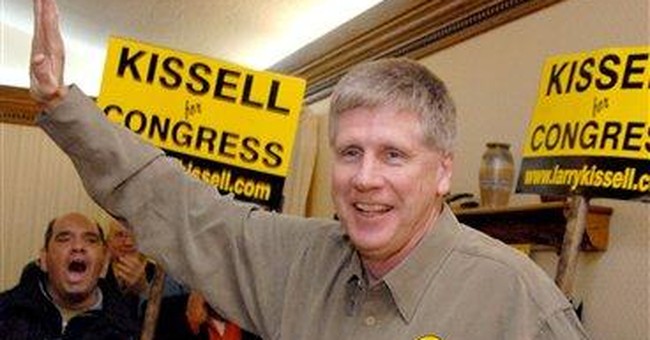 North Carolina’s Eighth District spans a large portion of the state, from eastern Charlotte to Fayetteville and covering much rural territory in between. It is currently represented by vulnerable freshman Democrat Larry Kissell, and rates as R+2 in the Cook Partisan Voting Index.  In 2004 George W. Bush carried the district with 54 percent of the vote, while in 2008 Obama won with 52 percent.  Republican Robin Hayes previously represented the Eighth District for five consecutive terms and defeated Kissell in 2006. In the Democrat wave year of 2008, Kissell ran again and finally defeated Hayes with the help of Obama on the ticket.  This year, Kissell will face Republican nominee Harold Johnson in the general election.

A recent poll by a Democrat-leaning firm showed Johnson within striking distance of Kissell, with the challenger just six points behind and the incumbent dangerously nine points under the critical 50 percent threshold. During his short term in Congress, Larry Kissell supported the Pelosi-Obama agenda, voting with the Speaker 96.1 percent of the time.  Kissell supported the failed trillion-dollar stimulus bill with only a higher unemployment rate and a larger deficit to show for it.  He also flip-flopped on ObamaCare and just recently voted to keep the job-killing “individual mandate” in place.

In a year when House Democrats are running to separate themselves from their radical leadership, Kissell will have a tough time defending his near-constant support of their radically liberal agenda in the general.  In a district hard-hit by economic distress, that record will prove difficult to overcome.

Republican nominee Harold Johnson, a political outsider, promises to fight for job creation and against wasteful spending on behalf of the struggling middle-class families in North Carolina’s Eighth district.  A former Marine and award-winning WSOC-TV sportscaster, Johnson broadcasted nightly sports news on TV and radio for more than three decades in the Charlotte region. Nicknamed "The Big Guy," Johnson was a 4-time EMMY winner as the Mid-South's Sportscaster of the Year.  Because of his impressive campaign structure, Johnson has been awarded Contender status in the National Republican Congressional Committee’s Young Guns program.  Where Kissell is devoted to the talking points of Pelosi and the Democrat leadership, Harold is committed the constituents of the Eighth District by favoring lower taxes and real economic improvement.