Brian McNicoll
|
Posted: Feb 19, 2016 12:01 AM
Share   Tweet
The opinions expressed by columnists are their own and do not necessarily represent the views of Townhall.com. 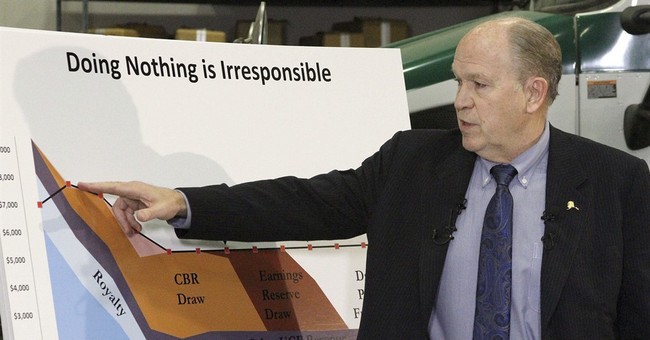 They say California gives us a glimpse of the future for the entire country, but the future of budget battles – state and federal – might be taking place in Alaska.

Alaska has no sales tax or income tax. Nearly all permanent residents receive a check every year from the state – it was about $2,000 in 2015 – and its percentage of residents on public assistance is the highest in the nation.

And now the state has a nearly $4 billion deficit, and lawmakers are meeting in Juneau to determine what to do about it.

Gov. Bill Walker, an independent and former Republican who came to office in 2014 by joining with Democratic nominee and now Lt. Gov. Byron Mallott to defeat Republican Sean Parnell,

Lawmakers have proposed selling bonds, changing how energy is taxed, making changes to how payments are made to the state’s public employee pension fund and even what would be the first statewide sales tax.

They have resisted, so far, questioning whether a state of 550,000 needs 25,000 employees or halting spending on AKLNG, a massive infrastructure project that ought to be funded privately if at all.

But one idea that seems to be gaining steam is a proposal to use the state’s permanent rainy day fund to cover the loss. The state already

But that money comes from the Earnings Reserve Account – interest generated by the now $51.3 billion in the Permanent Fund. What’s being suggested now is to dig into the principle of a fund established to take care of the state if the oil industry collapses.

And why is this budget crisis so different from those that have confronted Alaska on and off for decades? Because one of its biggest businesses wants it that way.

GCI – a conglomerate of broadband, programming and cable interests – is the dominant telecommunications company in Alaska. It is one of Alaska’s largest private employers, with 2,250 workers and $910 million in revenue in 2014.

It makes tens of millions of dollars per year off state contracts in Alaska, and it rakes in $170 million of the $230 million the federal government sends every year from the Universal Service Fund—created by Congress to ensure broadband access to all Americans.

And although everything is more expensive in Alaska, the service GCI provides is way more expensive. As in, the government spends about $26 per customer to bring broadband to remote areas in the lower 48 but $234 per capita in Alaska – a fact that somehow seems to bother Sen. Roger Wicker, R-Miss., far more than either of Alaska’s senators, Lisa Murkowski or Dan Sullivan.

The state ends up with about 1/50th of the money in the program, which sounds fair until one considers it has less than 1/600th the population.

And the company that provides most of its cable service probably would not be profitable without its annual allowances from Washington and Juneau.

GCI has established a non-profit – called OneAlaska – and has been traveling the state recruiting allies. It has focused on unions, especially public sector unions, whose ranks would be thinned if the state truly started looking at program needs.

It plans to “educate Alaskans,” according to a statement, and, according to State Sen. Bill Wielechowski, D-Anchorage, to force lawmakers to “get in line” or “face the wrath of having a lot of money spent against you.”

The CEO of GCI, Ron Duncan, makes no secret of his motivation. “I have a responsibility to GCI’s customers, employees, and their families to make sure that our company provides continued opportunities for growth and innovation for years to come,” he said in a statement announcing formation of OneAlaska.

In other words, continue excessive state spending, or your cable and broadband service gets it in the neck. That’s a level of crony capitalism not even California has reached.

Now, Alaska is in a unique situation in some ways. It has the same give and take on spending as any other state, but it also has this $51.3 billion piggybank. It wisely siphons off some of the interest but lets the principle continue to grow. If and win the oil industry peters out in Alaska, the leaders who preserved this will look pretty smart.

But government is not a big Rube Goldberg machine. It cannot be kept at a larger level simply so there will be enough customers for the local cable company for it to remain profitable.

If the cable company, with its monopoly protection, can’t turn a profit, the answer is not to raid a state’s rainy day fund or refuse to address state spending in a responsible way. The answer is to find a new cable company.

Bill Maher on Biden's First Year in Office: 'America Has Lost Its Faith in Joe'
Landon Mion
Why the Loss of Donors for Kyrsten Sinema is So Ironic
Rebecca Downs
Ex-Clinton Cabinet Member Apologizes for Saying That He Wanted Sinema to Be Manhandled Over Filibuster Vote
Matt Vespa
WH Adviser Cedric Richmond: Election Laws in Red States 'Would Allow People to Subvert' the 2022 Election
Landon Mion
Mask Plan for VA's Largest School District Involves Suspension Threats, Claims to Be 'Within a Caring Culture'
Rebecca Downs
The 'Glenn Youngkin Has COVID' Game Has Begun With Liberals
Matt Vespa