Brian Darling
|
Posted: Jun 30, 2018 12:01 AM
Share   Tweet
The opinions expressed by columnists are their own and do not necessarily represent the views of Townhall.com. 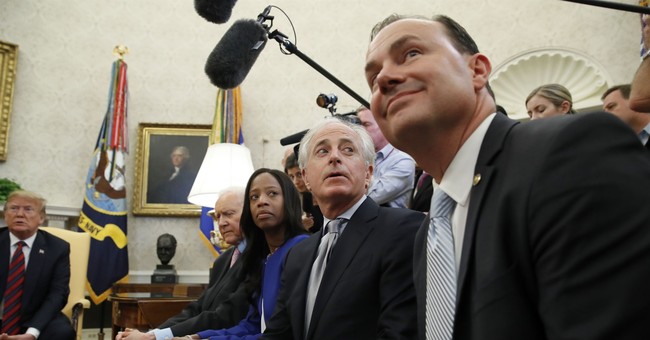 As a former staffer of Sen. Rand Paul (R-KY) and the Senate Judiciary Committee for Sen. Bob Smith (R-NH), I have spent quite a bit of time learning how the Senate works and the process to get a presidential nominee through the confirmation process.  That is why I think Senator Mike Lee (R-UT) would be the perfect pick for the Supreme Court.

This Supreme Court confirmation process is going to be an epic battle between liberals who will try to make the nomination a referendum on Roe v. Wade, and the Trump presidency, versus a Republican Party intent on getting this confirmation done quickly.  The left is already fear mongering that the retirement of Supreme Court Justice Anthony Kennedy signals the end of freedom as we know it and signals a new dangerous era on the court.

This fear mongering is nothing more than noise. The truth is that Justice Kennedy was a Reagan nominee and one would expect that President Trump will also nominate a conservative.  The great value in nominating Senator Lee is that Democrat and Republican Senators already know him well, consequently he has already been vetted by the Senate by virtue of his actions as a senator since being sworn in in 2011.

What many people don’t know is that Mike Lee is not a traditional politician.  He started his career as a law clerk in Utah, then clerked for Samuel Alito when Alito was on the Third Circuit Court of Appeals.  He was an Assistant U.S. Attorney for Utah, then went on to general counsel for Utah Governor Jon Huntsman.But his training as an attorney steeped in constitutional law started much earlier at the foot of his dad – former Reagan Solicitor General Rex Lee.  Most Americans know Mike Lee as a politician swept into office as part of the Tea Party movement, yet his history is more so steeped in the courts and studying the Constitution than in politics.

One aspect of Senator Lee’s career that is different from many others in the Senate is his willingness to reach across the aisle to work with Democrats - and some very liberal ones.  When the reauthorization of Section 702 of the Foreign Intelligence Surveillance Act was up for renewal early this year, Sen. Lee teamed up with Sen. Patrick Leahy (D-VT) to introduce the USA Liberty Act.   The bill was a compromise effort to both allow surveillance while protecting the Fourth Amendment rights of Americans scooped up in surveillance.

Sen. Lee has also been active on bipartisan efforts reforming criminal justice laws. Lee teamed up with Sen. Dick Durbin (D-IL) to push a bill titled the Smarter Sentencing Act that had the support of both the conservative Heritage Foundation and liberal Senate cosponsors including Sens. Leahy, Cory Booker (D-NJ), Sheldon Whitehouse (D-RI), Richard Blumenthal (D-CT), Ron Wyden (D-OR), Brian Schatz (D-HI), Bernie Sanders (I-VT) and Elizabeth Warren (D-MA).  Although I don’t expect any of these liberal senators to support Sen. Lee, they are going to have a difficult time dehumanizing him and painting him as a radical when they saw fit to cosponsor and work with him on legislation.

Lee has authored four books since being sworn into the Senate with two of them focusing on the constitution and our Founders.  Arguably, no other Senator has the deep experience of Senator Mike Lee in both the political process and in studying the constitution.  Mike Lee is clearly qualified to be on the bench and has a great relationship with other senators making it very difficult for the opposition to fight his nomination.

In looking at all the other names being bandied about, the one thing they all lack is being elected from the people of their state to serve in the federal legislature.  That quality should be painted an asset, not as a liability.Justice Sandra Day O’Connor was a former Republican leader of the Arizona state Senate, therefore political services should not be a disqualifier.  Furthermore, not many Americans know the record of the various Appeals Court justices and federal District Court Judges who are being publicly vetted right now, yet Sen. Lee’s record is out there for all to see.  Ultimately, we live in a nation where the American people consent to the actions of elected officials and they should play an informed role in the confirmation process.

Senator Mike Lee would be a unique pick and somebody with an ability to partner up with liberals when they are right on constitutional issues, like the 4th Amendment to the Constitution.  He would be an excellent pick for President Donald Trump.

The Lee nomination would likely sail through the Senate after some hand wringing by the left that President Trump had outsmarted them again by nominating the one person that they would have a difficult time making into a judicial monster.