Brian Darling
|
Posted: Mar 19, 2018 12:27 PM
Share   Tweet
The opinions expressed by columnists are their own and do not necessarily represent the views of Townhall.com. 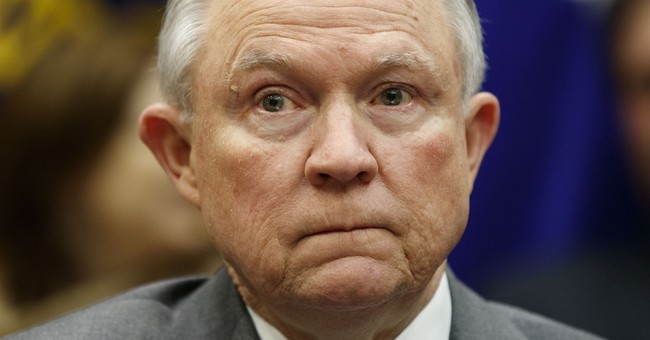 A poll was released on Monday that indicates strong support by Republicans and in swing states for medical marijuana.  So why is Attorney General Jeff Sessions trying so hard to cross voters who relied on President Trump’s repeated campaign promises to protect medical marijuana states?  Seems like Republicans in tough races are doing everything they can to lose control of both the House and the Senate.

Kevin Robillard of Politico reported on March 19, 2018 that “House and Senate candidates in competitive contests should embrace medical marijuana in their election bids this year, according to a new survey from the lead campaign pollster for now-President Donald Trump.”  The poll conducted by Tony Fabrizio, David Lee and Travis Tunis of Fabrizio, Lee and Associates concluded that 77% of likely 2018 voters had favorable opinions of medical marijuana.  This broke down to 74% in key Senate states and 76% in competitive House races.  Digging deeper you see that 68% of Republicans support medical marijuana.  This seems like a no-brainer for candidates who worry about polling on specific issues.

If candidates are worried about the policy side, they need to look no further than the multiple promises both Republicans and Democrats have made to respect the idea of federalism.  On May 18, 2017, Speaker of the House Paul Ryan (R-WI) and House Minority Leader Nancy Pelosi (D-CA) released a joint statement about the creation of a joint task force on intergovernmental affairs.  Ryan said at the time “Federalism is not a Republican or Democrat principle, but an American principle—and one that is integral to a thriving culture and economy. But in recent years, the principle of federalism has been slowly chipped away at by an overzealous federal government.”  Republicans are in danger of letting Democrats take the issue of federalism away from them by opposing federalism in medical marijuana laws.

Right now, Congress is working on finalizing appropriations for the year and one issue is whether they will include Rep. Dana Rohrabacher’s (R-CA) rider that has prevented the Justice Department from going after growers, distributors, doctors and patients in states that have allowed medical marijuana since 2014. Republicans in Congress seem to be listening to Attorney General Jeff Session’s war on medical marijuana rather than their own constituents.

The problem is that many states have passed laws that have liberalized marijuana laws in a way consistent with the core Republican value of federalism.

The Fabrizio, Lee and Associates poll results mirror other polls like the Yahoo/Marist poll published on April 17, 2017, which found that 83% of Americans agree with the idea that doctors should be empowered to prescribe medical marijuana. When Fabrizio asked the question if a likely voter supported “legalizing the use of marijuana for medicinal purposes when prescribed by a doctor to treat specific medical conditions” the support rose to 89% yes and only 10% no.  Since May of last year, Sessions has pushed hard to anger this strong support, 77% to 89% depending on the question, of the voting public.

If Republicans listen to Sessions and renew a war on states that have allowed medical marijuana, they will be angering voters in the months before a critical election, violating a core promise to respect federalism and opposing Donald Trump’s campaign promises to protect medical marijuana states. That is truly dumb politics and policy.

The bottom line is that Republicans need to work hard to prevent a wave that would hand over the House, and maybe even the Senate, to Democratic control.  If they bend to the unpopular will of Sessions and start a war on medical marijuana, expect President Trump’s ground troops in the Congress to be discharged from duty early and looking for new jobs.