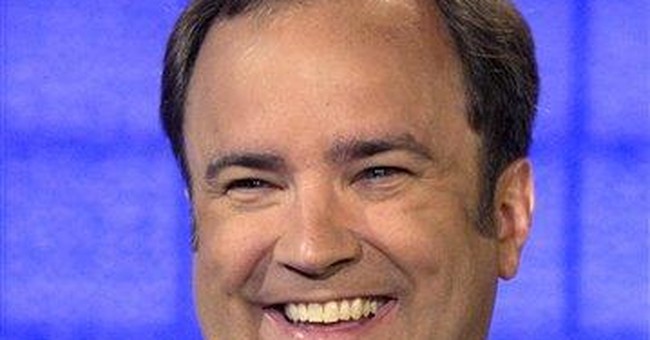 I love you James Carville.

His call for former White House speechwriter Matt Latimer to be ‘glove-slapped’ is among my favorite quotes of recent memory. The references to him as a ‘dweeb’ and a ‘punk’ were particularly entertaining too. And totally appropriate too since he just lobbed a blade into the back of President George W. Bush.

Matt Latimer is but another in a long line of former White House staffers who demean the amazing opportunity to work at the highest levels of our republic by trashing it and selling it. And he attempts to justify those actions by implying that he is driven to do so by some self-righteous sense of duty that comes after making the shocking discovery that the White House isn’t exactly as romantic as he had dreamed.

Latimer expects to be given a pass for his gossipy ways by portraying himself as the young, Ronald-Reagan-inspired ideologue (cue ‘Morning in America’) who came to Washington to change the world. On his way to the top however, he made the awful discovery that Washington is actually a place where politics plays a part in decision-making, people make fun of other people and sometimes they, gasp, swear. For someone who purports to be so incredibly sharp, he sure is naïve.

My major beef with Latimer is not the astounding arrogance with which he suggests he was smarter and more morally-centered than basically everyone (including the President) at the White House in which he served. Nor is the fact that he published things he saw and heard there with the discretion of a pre-pubescent girl on her Facebook page. (I do find it amazing that he was able to recount with such vivid accuracy conversations from months ago when I can’t remember what I had for lunch today.) Even the fact that he felt the need to grace the world with a memoir filled with the wisdom that comes from 30-something whole years of living doesn’t bug me most. No, my major problem is that he broke the code shared by White House staff – you don’t trash your friends, your colleagues, and most of all, your President.

I worked in President Bush’s office of speechwriting for the two years following the attacks of September 11, 2001. It was an honor to be there, to be among the brightest, hardest-working, and most-dedicated individuals around, and to serve in those hallowed halls. Overworked, underpaid, and more often than not unnoticed, I wouldn’t trade a day of that experience for anything.

While I wasn’t the caliber writer or senior staffer who had the President’s ear that Latimer claims to have been (I learned on about day three of my White House tenure that there are about six people on the President’s staff who actually matter, and I wasn’t one of them), I was on the team. And being on the team meant understanding a key responsibility – you serve at the pleasure of the President.

What does that mean? Quite simply, you are there to help him, to advance his efforts, and to protect him. It also means that if you have a problem, become disenchanted, or are just too conflicted with the evil and misguided way things are being done, you leave. Pretty straight-forward, except to folks like Matt Latimer. His brand of White House staffer sees the opportunity to better the President as secondary to the opportunity to better himself.

And like Scott “Benedict” McClellan before him, that opportunity comes in the smarmiest form of all – trying to make a quick buck by selling a book no one of consequence will read. Now, as the few minor ‘a-ha’ salacious nuggets cycle out of the 24-news rotation after generating such incredible headlines as “Bush Mocked Other Pols While President” (how shocking), his tome will become little more than a footnote, but a costly one at that. After alienating all of his former colleagues, I suppose Latimer has no interest in working in politics again. Then again I wonder who would trust him to sit in a closed-door strategy session in any professional endeavor? Not me anyway.

It’s ironic too that in his book, Latimer suggests disappointment that the real west wing didn’t live up to Aaron’s Sorkin’s fictional portrayal. As a fan of that show, I can say that Sorkin went to great lengths to highlight one major theme throughout the series above all others – loyalty. It’s too bad this is one real-life tenet that Latimer failed to grasp.