Brent Bozell and Tim Graham
|
Posted: Jun 01, 2018 12:01 AM
Share   Tweet
The opinions expressed by columnists are their own and do not necessarily represent the views of Townhall.com. 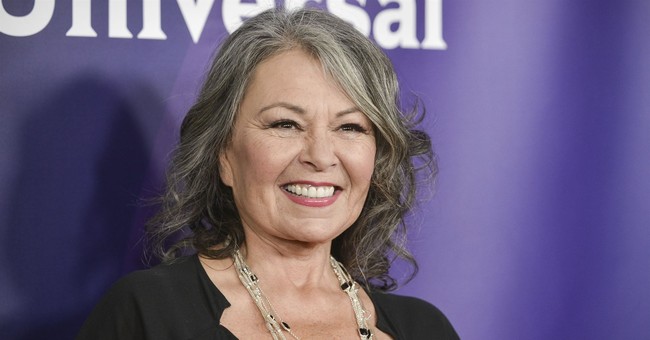 Who knew we would look back at Roseanne Barr's crotch-grabbing massacre of the national anthem in 1990 and see a mere flesh wound on her career? She embarrassed herself, mocking America in front of America, but her hit show rolled along.

But one egregiously racist tweet destroyed the "Roseanne" reboot of 2018 in a Hollywood minute. Tweeting that former Barack Obama top aide Valerie Jarrett is a mixture of the Muslim Brotherhood and "Planet of the Apes" put an abrupt end to the top broadcast television program of the year.

ABC made the right decision -- and the obvious business decision. You cannot compare blacks to monkeys. That is an old, dehumanizing trope. It is viciously mean-spirited to compare President Donald Trump to an orangutan, as many leftists have. But that is a mockery of one man's hair and intelligence, not the rhetorical equivalent of a burning cross.

In retrospect, everyone said ABC should have known this was going to happen. Barr has always been a loose cannon, and her politics have zigzagged from running on the presidential ticket of the nutty-left Green Party all the way over to backing Trump. But the network thrived with the original formula of "Roseanne," and it saw a win-win with a reboot: The show's old audience would tune in, and ABC could sell itself as reaching out to the red states after mysteriously dumping Tim Allen's hit show. The ratings were terrific. Then Roseanne drove the reboot over a cliff.

Dehumanizing tropes about black people don't always destroy careers ... when the black is a Republican. For example, Pat Oliphant didn't stop being the most widely syndicated political cartoonist in the world after he drew then-Secretary of State Condoleezza Rice as a parrot with large lips sitting on then-President George W. Bush's hand in 2008.

This was a trend. Christian Science Monitor cartoonist Jeff Danziger drew a barefoot Rice in a rocking chair saying, "I knows all about aluminum tubes! (Correction) I don't know nuthin' about aluminum tubes ..." In the radical fever swamps, cartoonist Ted Rall drew one with Rice saying, "I was Bush's beard! His house n----!" And a black male character replies, "Now hand over your hair straightener." He is wearing a T-shirt that says, "You're not white, stupid."

Even as "Roseanne" is canceled, let's not congratulate Disney CEO Bob Iger as the King of Televised Civility. This is the same company that dragged its feet for weeks after ABC co-host Joy Behar insulted millions on "The View" when she cracked that Christians like Vice President Mike Pence who act like "Jesus talks to you" have a "mental illness." We protested until Behar apologized on air, and she has since compared Trump to an orangutan, because it's just another day in the Resistance.

Days before the Barr debacle, Disney-owned ESPN rehired Keith Olbermann, fresh off a series of unhinged Trump-hating videos for GQ magazine and a book titled "Trump Is F---ing Crazy (This Is Not a Joke)." He's also vicious on Twitter, like this tweet to the president and former Sheriff Joe Arpaio: "You and @Potus can go f--- yourselves, you racist Nazi f---s!" In another tweet, he lectured Republicans with emphasis: "This is the creature you have unleashed on us. GET THIS SON OF A B---- THE F--- OUT OF HERE."

With Olbermann, no one inside the liberal-media bubble is yet preparing a spin for the next inflammatory incident: "Disney should have known what it was doing when it rebooted this unstable character for another run."