Brent Bozell and Tim Graham
|
Posted: Aug 18, 2017 12:01 AM
Share   Tweet
The opinions expressed by columnists are their own and do not necessarily represent the views of Townhall.com. 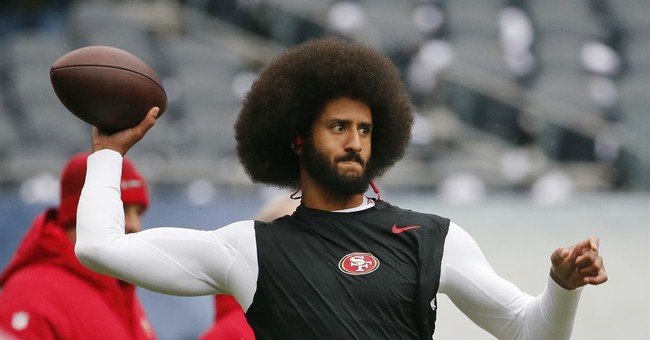 The National Football League's preseason is underway, and national anthem-hating quarterback Colin Kaepernick still doesn't have an NFL job. One can easily identify the liberal journalists by their anguish over this so-called injustice. You can also identify them by their dishonest arguments.

Washington Post sports columnist Jerry Brewer pulled out a very large straw man on Aug. 17 in a column headlined "Days of Docile Black Athlete Have Ended. Get Used to It." He doubled down in the text, saying: "Sorry for the inconvenience, sports fans, but the days of the docile black athlete are over. This isn't a time to stick to sports. This isn't a time to be afraid because Kaepernick has been blackballed." To argue that Kaepernick's critics want "docile blacks" is character assassination.

Then, Brewer added that the national anthem lasts about two minutes, as does an interview after the game about that anti-American kneeling stunt. He spewed: "If you think that's too much of a distraction from sports -- the ultimate distraction -- you're living an awfully petty life. I'm sorry you didn't get to put extra sprinkles on your ice cream, but there are more important matters."

Brewer surely knows that Kaepernick's antics didn't cause two minutes of liberal concern or conservative outrage. We've had an entire summer of ESPN and other liberal sports pundits like Brewer demanding that Kaepernick somehow has an inalienable right to a job in the NFL after his antics.

Most of these liberals impose their own righteousness about America's "systematic racism" without acknowledging that Kaepernick went beyond this quiet pre-game stance. They ignore that he wore socks in training camp featuring pigs with police hats on them. They ignore that he wore a T-shirt with former Cuban leader Fidel Castro on it as he supposedly advocated for freedom of speech.

When challenged by Cuban exile Armando Salguero of the Miami Herald about the T-shirt, Kaepernick proclaimed that communist Cuba was better than America. He said, "One thing that Fidel Castro did do is they have the highest literacy rate because they invest more in their education system than they do in their prison system, which we do not do here, even though we're fully capable of doing that."

Salguero called that out as false, as phony as the Castros winning 100 percent of the vote. When he told the quarterback that Castro's regime broke up families (including his own) as they sought to escape, Kaepernick attacked America again. "We do break up families here," he said. "That's what mass incarceration is. That was the foundation of slavery, so our country has been based on that as well as the genocide of Native Americans."

It's not a matter of "extra sprinkles on our ice cream" to smear the police as porcine, racist killers and smear America as founded not on liberty and justice but on slavery and genocide.

But Brewer, that professor of logic, thinks that Kaepernick's complete evisceration of America is somehow what makes this country ... great? He said: "But if America is still America -- beautiful despite some ugly features, slow to evolve but persistent, a compassionate democracy -- history will judge Kaepernick ultimately not as a rogue and defiant objector, but a man ahead of this time who helped spur an important athlete revolution."

What liberal journalists are demanding here is that every famous person in front of a microphone exploit that platform to call for a leftist revolution. Athletes, actors, musicians, reality TV stars and everyone else should always be shilling against the horrid country that America was -- and presently is under the Republicans. "History" (always equated with liberalism) will grade them as heroes ahead of their time.