The Great Manipulators at Time

Brent Bozell and Tim Graham
|
Posted: Feb 08, 2017 12:01 AM
Share   Tweet
The opinions expressed by columnists are their own and do not necessarily represent the views of Townhall.com. 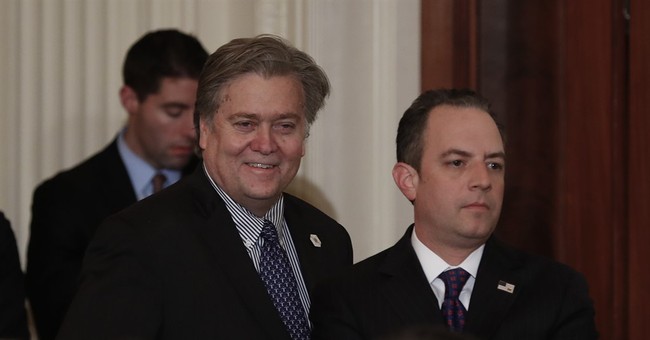 Time magazine has singled out White House strategist Steve Bannon for its Darth Vader cover treatment. Shown is a picture of Bannon looking like a Marvel Comics villain and the title "The Great Manipulator." Bannon dared to identify the liberal media as "the opposition party." Time took offense and demonstrably proved him right.

Demonizing the president's aides is something Time and its liberal ilk have not done to Democrats since the days of President Jimmy Carter, when Time was liberal but not nearly as leftist as it is today. At this point eight years ago, the same magazine was profiling President Obama's aide Larry Summers as the "brash and brilliant economic adviser," the "economic wunderkind ... moving at flank speed" who speaks with "an almost poetic clarity."

Obama was always center stage. No evil wizard manipulated him from behind the curtains. That only happens under apparently "manipulated" dolts like President Reagan, President George W. Bush and now, President Trump.

The new article is headlined "The second most powerful man in the world? Steve Bannon has the President's ear. But he wants more." For Trump, Bannon is "a director who deploys ravenous sharks, shrieking tornadoes and mushroom clouds as reliably as John Ford shot Monument Valley."

Decades ago, Time shredded the notion that it is a news magazine, steadily becoming evermore politicized. It's a badly disguised journal of rampaging liberal opinion. But it is a stubborn pretender. It insists that its brand of liberal advocacy passes as acceptably objective inside today's news business, and it's right, of course.

Time managing editor Nancy Gibbs unfurled a nasty gram at Bannon in her "From the Editor" letter up front. She cited Bannon's "opposition party" comment and then spat, "To demonize the press, to characterize it as not just mistaken but malign, is to lay the groundwork for repression."

Gibbs thinks her magazine is serenely centrist and objective, which makes her a fool. Lest anyone take offense, consider the alternative: If not a fool, she'd be a raging liar. She boasts: "At a time when the media is ever more fractured and siloed, and much of it partisan on both sides, TIME is one of the few remaining institutions that speaks to a broad and global audience. ... Our purpose is not to tell people what to think; it is to help them decide what to think about."

This kind of bloviation is especially nonsensical coming from Gibbs. Take her valentine to Obama after his first victory. She placed him on par with Christ, saying: "Some princes are born in palaces. Some are born in mangers. But a few are born in the imagination, out of scraps of history and hope." What a bottle of ipecac.

Then there's Gibbs on President Bill Clinton during the Monicagate scandal. She said: "In the gaudy mansion of Clinton's mind there are many rooms with heavy doors, workrooms and playrooms, rooms stuffed with trophies, rooms to stash scandals and regrets. He walks lightly amid the ironies of his talents and behavior, just by consigning them to different cubbies of his brain. It's an almost scary mind, that of a multitasking wizard."

Put a cork in it. The jig has been up for 30 years. No one's buying the outraged protests of nonpartisanship. What Time is claiming to be news is the very definition of fake news.