The Haters of 'All Lives Matter' 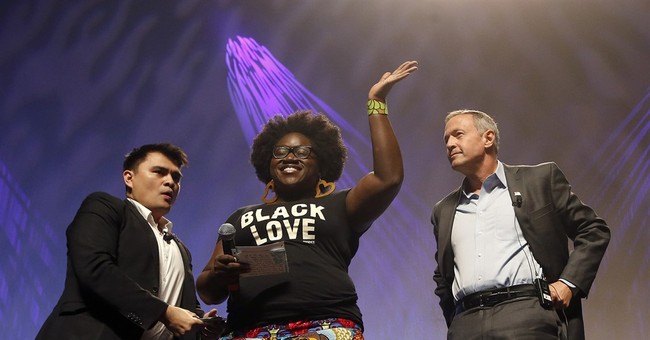 Trending
Back in March, the pundits expressed horror at the alleged extremism of the Conservative Political Action Conference.

On ABC, NPR correspondent Cokie Roberts insisted "I think the person that won at CPAC was John Kasich. He didn't show up, and I think that's the wisest thing for anybody to do." ABC pundit Matthew Dowd bizarrely suggested Ronald Reagan would be booed at today's CPAC.

On NBC, they found peril for Scott Walker after his speech: "Governor's gaffe? ... Presidential hopeful Scott Walker under fire for saying his experience with union protesters has prepared him to take on ISIS. Is it the first major blunder of the presidential race?"

On PBS, "conservative" pundit David Brooks said "There's conservatives ... and then way over on the other side of the room is CPAC ... this is like the hardest of the hardcore."

But when the hardest of the hardcore left met in Phoenix for Netroots Nation, the networks didn't see a problem, when socialist Bernie Sanders actually gets bum-rushed off the stage early for not being leftist enough. ABC, CBS and NBC couldn't locate that story.

It looked like the raucous, out-of-control George McGovern 1972 Democratic convention as protesters hijacked interviews with Sanders and Martin O'Malley. Before the protest, it was already an extreme show. Their interviewer was Jose Antonio Vargas, the former Washington Post reporter and undocumented alien who's hosting a new "white privilege" documentary on MTV.

O'Malley allegedly made a massive error by asserting that not just black lives matter, but "all lives matter." He was immediately pressed to apologize by the radical left, who think it's heinous to insist that black lives aren't the most precious ... and the most endangered.

These activists don't mean black lives are the most at risk from gang warfare, drug addiction, or from abortion clinics. They only mean it as a rhetorical war on our nation's police forces. O'Malley didn't turn the event into a melee by insisting "police lives matter."

On MSNBC, the nut-roots channel, Caroline Heldman of Occidental College (an Obama alma mater) spoke for the protesters: "We live in a white supremacy system where we place more value on white lives. It is empirically proven time and time again."

The left assaulted O'Malley as "tone deaf" for insisting that all lives matter, but they are the ones that don't realize most voters see "all lives matter" as the most reasonable and most humanitarian slogan. The left is clogging Twitter with tweets insisting it's like telling AIDS activists that all deadly diseases matter. But if you care about everyone's health, that would be the most politically aware statement.

At what point does the Democratic party start having problems with white voters as the radical left wails about "white supremacy"? Between their loathing for police and for any attempt to enforce the immigration laws, these agitators could revive the "law and order" majority of the 1970s. Mitt Romney won the white vote by 20 points in 2012, which couldn't offset the massive minority tilt toward Barack Obama. But Hillary Clinton is a member of the "oppressor" race, as are Bernie Sanders and Martin O'Malley.

At least on PBS, the conference came up briefly, and political analyst Stuart Rothenberg warned that the Netroots disruptions could be a "problem" like the tea party for Democrats. USA Today's Susan Page agreed Hillary Clinton "is going to have to deal with a party that has moved significantly to the left since her husband ran for president."

The lesson? Never let the media decide for you where the center is and where the fringes are. They can't find them with both hands.